Karoly Hajdu, the son of a tailor, was raised in Budapest. Karoly did badly at school but read voraciously on his own.

After Hungary declared war on the Soviet Union in 1941 he managed to obtain a ‘student exemption’. In 1942 he forged a birth certificate that he was Karoly Mihaly Balazs Agoston Hajdu, son of the Baron of Szadelo and Balkany. Shortly afterwards he was conscripted into the Railway Builders Regiment, but managed to wrangle a transfer to the army propaganda unit – where he stole cameras and sold them on the black market. He later admitted that he had cold-bloodedly killed a teenage soldier because he could not show the right papers, and claimed to have been in the German SS.

After the war his sister emigrated to Venezuela, and later was joined by their mother.

Calling himself Karl Hajdu , Karoly managed to get to the British sector in Austria, and from there, as he spoke good English, to Britain in 1948 as a refugee. Presenting himself as Baron Carl Balkanyi who at been a university lecturer, he got a job at Harwich Labour Exchange, and then at the British Council.

He was experimenting with cross-dressing. A friend left a suitcase with his wife’s dresses and underwear and Carl tried them all on. He asked the friend to remove the case. He bought female clothing, and then purged them.

He worked in small hotels and nightclubs, and in Brighton met Phyllis Rogers. She and her son moved to London to be near him, and they were married in February 1953. Carl put his female clothing into storage.

He opened an accommodation agency in Paddington, illegally charging prospective tenants. He was taken to court several times on this charge and for not registering his business, being fined increasing amounts. Shortly after the 1954 conviction, he presented at the Hungarian Embassy declaring that he was a fugitive and prepared to go back. This was reported in the Daily Mail. The Sunday People sent a reporter to his agency, and ran a lengthy article on how he ran his business.

After the Hungarian Uprising, Hajdu collected ₤2,000 to send ‘freedom fighters’ into Hungary, and led a march to Downing Street. However he was not able to explain where the money went.

In 1957 he was pressed into bankruptcy listing 26 creditors. He retrieved his case of women’s clothing.

Shortly afterwards he took the name of Michael Karoly and took a course in hypnotherapy. He never graduated but set up in business as a hypnotherapist anyway. He also was taken on as a psychology lecturer at the Stanislavsky Studios in Knightsbridge, and wrote a column on psychology for Today magazine. He was also commissioned by Paul Elek, a Hungarian, to write a book on hypnosis. The book, the only one of his ever published, includes an early explanation of the joys of cross-dressing, and many of the patients in the book are aspects of himself.

In 1963 he was charged at Knebworth with a breach of the peace after being arrested dressed as female. He separated from his wife, founded Divorcees Anonymous and seduced several of the women who attended. After a denouncing article in the Sunday People, both his hypnosis patients and members of Divorcees Anonymous stayed away.

He attempted to return to his wife, but she had a new lover. She died of a severe uterine haemorrhage that erupted while she and her lover were on holiday in Germany. It then came out that she had embezzled thousands of pounds from her employer. Her son Peter died in a road accident a few weeks later.

In shock Michael retreated into Phyllis’ flat, avoided all contact and took lots of photographs of himself in his wife’s clothes. He wrote two novels in this period: One, Siobhan, was about one of his lovers. Although she was newly married, he sent it to her. She and her husband instantly contacted their solicitor, and warned Karoly off. The Second Coming was a science fiction novel with a sex-change theme.

In May 1966, he was charged with 13 offenses of obtaining credit under false pretences, and trading as a psychologist without disclosing that he was an undischarged bankrupt under another name. He was jailed for three months.

In 1967 he wrote to the prominent female impersonators Danny La Rue and Ricky Renée for advice on cross dressing.

He placed an advert in the New Statesman as a psychologist seeking transvestites, and got a dozen replies. One was from the person who would transition as Della Aleksander, but who at that time was a novice. Another, a silk fetishist, persuaded Michael that he could be a ‘spiritual transvestite’ for whom the clothes are merely an emblem. He acted as male escort for several of his new contacts, and started a book, Man and/or Woman: A Comprehensive Study of the ‘Tammuz Complex’ (Transvestism), using the anecdotes of his new contacts.

He also started to go out dressed as Charlotte. At the same time, as Michael, he took his last female lover. Through Della, Charlotte was able to obtain female hormones, although she persuaded herself that living as a woman in itself altered her hormones. Her method of coping with being read was to engage the person in conversation, and to repeat the story of how her husband and son had died. From 1968, Charlotte was more or less living fulltime as female. The major exceptions were signing on for unemployment pay, and Michael the psychologist’s one paying client.

Karoly’s mother in Venezuela had not heard from him since his bankruptcy in 1957. A friend from Caracas visited Londo 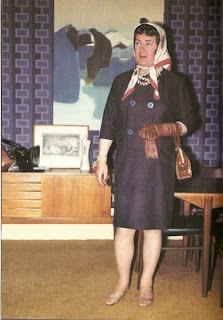 n and discovered Charlotte. The mother, at 82, accepted her new daughter. Two years later she came to visit.

Charlotte changed her name by deed poll in 1970 to Charlotte Maria Beatrix Augusta Hajdu, but normally used the surname Bach. She started writing the enormously long Homo Mutans, Homo Luminens which presents the transsexual urge as the key to human evolution, but could not interest any publishers. She also wrote an autobiographical novel Fiona which also has never been published.

Using the name Daphne Lyell-Manson she went into business as a spanking madam. She later wrote about the spanking trade: “On the Basic Axioms or Lemmata of a Universal Theory of Relativity”.

Charlotte started giving weekly talks in a friend’s flat. One of her acolytes, Don Smith, produced several pamphlets on Bach’s ideas, each of which sold between 500 and 1,000 copies. She was several times invited to speak to gay and lesbian groups. She wrote to television programs and the science editors of The Times offering her assistance, but was not taken up. She wrote to the Archbishop of Canterbury to advise him that god is a human invention.

She sent a 521 page version of Homo Mutans, Homo Luminens, all in capitals and on orange paper, to the writer Colin Wilson, who eventually read it, and became an enthusiast. He interviewed her for the magazine Time Out, and featured her prominently in his book, Mysteries, 1978.

Brian Lewis, a professor at the Open University used his research budget to print 100 copies of her book, and she sold it at her weekly meetings. She was invited to give seminars at a few universities, and she upstaged the featured speakers at a debate at the Royal Institution. A wealthy doctor, Michael Kirkman, endowed the Kirkman-Bach College of Human Ethology, and Charlotte wrote 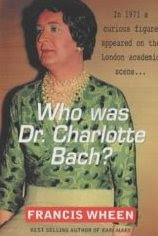 to the eminent ethologist Desmond Morris to be a patron, but Morris was quite puzzled by the approach.

Charlotte died of untreated liver cancer, having refused to go to a doctor, at the age of 60. The revelation that she was a ‘man’ was a surprise to Wilson and Lewis.

She left her papers to Bob Mellors who had been a gay activist. He researched her life for several years until he was murdered by a burglar in 1996 in Warsaw where he was teaching English. A friend of Bob passed the papers onto Francis Wheen.

Although the Beaumont Society, the UK Princian group, had been founded in 1965, Michael/ Charlotte never bothered with it. Nor did she attend the Porchester Balls which started in 1969, nor the Gay Lib dances in the early 1970s. Nor Yvonne Sinclair’s TV/TS Support Group after 1976. She probably would not go to any event where she was not in charge.

There is no mention of Charlotte Bach in Kris Kirk & Ed Heath’s Men in Frocks, 1984. I was active in London Gay Lib in the early 1970s, but I never heard of Charlotte Bach until I read Colin Wilson many years later.

Some of our enemies would suggest that a fraudster is a natural for doing a gender change and getting away with it, as would be an actor. However the reality is probably that a person who is a fraudster in their life before transition, will use the same approach when they do transition. There are others, almost certainly greater in number, who strive for authenticity, and a gender change comes naturally, as part of that authenticity.

Amazon has a product review of Wheen's book that is so negative that I am going to reproduce it as a curiosity: “Mercifully published by Short Books, this nasty little work is not short enough. It is just possible that Wheen, formerly a Guardian columnist, may be writing a spoof but, even so, the point of the book escapes even the most generous reader. It's not funny, it's not interesting and it is stuffed with extremely tasteless photographs which leave a scummy feeling in the mind. According to Wheen, Charlotte Bach wrote unpublished and unpublishable books about sexual deviancy, both fiction and non-fiction, frequently using her own life as material while attributing her own experiences to other 'patients'. The relevance of the title escapes the reader for Wheen gives ample documentation about his subject.”