Elizabeth Forbes-Semphil was raised in Scotland, and identified as a male from a early age. In his 20s as Ewan he was very involved in the Scottish country dance revival movement, dressing and dancing the man’s part. He graduated in medicine from the University of Aberdeen in 1944, and became a practicing doctor until 1955 when he retired to manage the family estates of Fintray (map) and

Craigievar (map) for his brother the Baron.

In 1952 he applied to enter in the Register of Corrected Entries substitutions of his name and sex. This was granted, based on his oath and medical evidence. A few months later, he married Isabella Mitchell, his housekeeper.

In 1965 his elder brother died, and he was to assume the Baronetcy. His cousin, John Alexander Cumnock Forbes-Semphill, contested the inheritance on the grounds that Ewan was female. A two-year court battle ensued, first in the Scottish Court of Session where Dr Charles Armstrong gave evidence that Ewan was intersex, and then the case went to the Home Secretary (the future Prime Minister), James Callaghan. A letter from Ewan’s sister was produced to the effect that he was female, but Ewan’s wife testified that they had normal intercourse. The Session judge decided that Ewan was “predominately male”, though intersexed. The Right Honourable James Callaghan, after consulting with the Lord Advocate, directed that Sir Ewan Forbes (he had dropped the ‘Semphill’) should be entered in the Roll of Baronets as The 11th Baronet of Craigievar and The 20th Lord Semphill,  Sir Ewan Forbes of Craigievar, 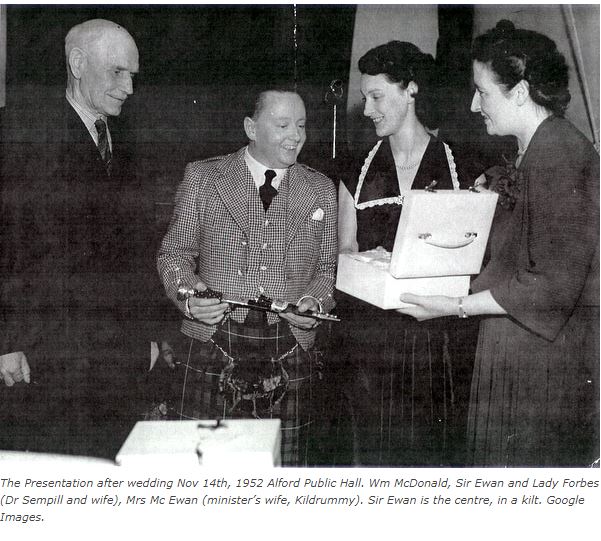 No public records of either the Court of Session or of the Lord Advocate's advice are available. This would appear to be an aristocratic privilege, but resulted in the precedent not being considered in April Ashley’s divorce (Corbett vs Corbett) in 1970.
-------------------