Georges Burou was the son of a French teacher in Algeria. He qualified as a doctor, and initially worked in a gynecological clinic.  After a fuss about abortions, he moved to Casablanca, Morocco in 1940.   He served in the Fourth French-Moroccan Mountain Division, and was part of the liberation of Alsace.

Back in Casablanca he opened his Clinic du Parc at 13 rue Lapébie. Again he was the go-to doctor for women seeking an abortion.  In 1956 he was approached by Jenny, a nightclub electrician, desperate to become a woman who had already been rejected by other gynecologists. In 1957 the newspaper France Dimanch carried a story about Jeannette Jiousselot, a carpenter who likewise was accepted by Dr Burou.

Burou developed a technique to create a vagina using a live graft taken from the penile skin, and continued to refine and improve it. He was initially unaware of previous vaginoplasty by Ludwig Levy-Lenz in Berlin in the 1930s; Lennox Broster in London in the 1930s and 1940s; Harold Gillies in England in the 1940s and 1950s; Elmer Belt in Los Angeles in the 1950s.

It was Jenny who informed Coccinelle of what Dr Burou could do, and over the next few years several performers from Le Carrousel, not only Coccinelle but Bambi, April Ashley, Amanda Lear and Capucine came for the operation, and Borou became famous as the sex change doctor of choice. 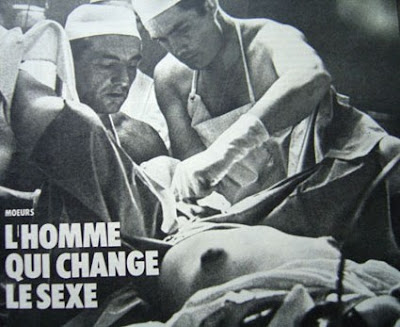 Dr Burou was also the first doctor in Morocco to offer in vitro fertilization.  This was often without the consent of the husband, so as not to offend his manhood.

In the US the rich businessman whom we know as Rex/Gloria, who herself felt too old for surgery, was adopting younger trans women and paying for them to go to Dr Burou.  In addition, especially after Belt reduced and then discontinued his practice, Harry Benjamin sent many to Dr Burou for surgery.

++Previously, vaginoplasty, where it was done in the US had taken skin from the patient's thigh to construct the vagina.   However returning patients who had had surgery from Dr Burou were able to demonstrate the advantages of Burou's penile inversion method.   Dr Edgerton adopted and adapted this method.  When he was contacted by Dr Stanly Biber in 1968, this was the method that was recommended.

In 1970 Dr Burou was interviewed by the Sunday Mirror:


"I don't remember Miss Ashley in particular.  It was a long time ago and I have done so many similar operations since then.  But I know how she must feel as a result of the judge's decision.  Every human being has the right to try to find happiness, and if people like Miss Ashley can find happiness by living and working as women why shouldn't they?"


"We have at least two applications a day for the sex change operation.  They come from all over the world.  This week we have done three operations. Last week we did four.   All over the world there are these people who feel so tragic because they are mentally and psychologically women, but have the characteristics of a male body.  ... A couple of months after the operation here, our young women could have examination by doctors in their home countries who would probably not notice they had ever been men."


"I did not know his address, but when I arrived in Casablanca I looked him up in the telephone book, and was told to come round to his clinic next afternoon.   ...  He was exceedingly handsome.  He was small, dark, rather intense of feature, and was dressed as if for some kind of beach activity. He wore a dark blue open-necked shirt, sports trousers and games shoes, and he was very bronzed.  He welcomed me with a bemused smile, as though his mind were in St Tropez.  What could he do for me, he asked?  I told him I thought he probably knew very well.  'Ah, I think that's so.  You wish the operation.  Very well, let us see you.'  He examined my organs.  He plumped my breasts - 'très, très  bons'.  He asked if I was an athlete. 'Very well,' he said, 'come in this evening, and we shall see what we can do.  You know my fee?  Ah well, perhaps you will discuss it with my receptionist - bien, au revoir, until this evening!' "


In 1973, Dr. Burou gave his first formal public presentation on his innovative surgical technique at a major conference held at the Stanford University Medical School. By that time he had performed over 3000 MtF operations.


"I do not transform men into women. I transform male genitals into genitals that have a feminine aspect. All the rest is in the patient's head."

In an article by Associated Press in 1974:


"Dr Burou said that his patients come from all parts of the world and from all walks of life.  Almost half of them are Americans.  Others come come from western Europe and Japan.  Their average age is 30, but his oldest patient was a 70-year-old German.  'I often get appeals from patients to operate on their teenaged sons,' Burou said. 'I tell them to wait until the boy comes of age, because the operation is final and irreversible and you can't risk making a mistake.'  He said that he successfully operated on a 50-year-old French Roman Catholic priest, and Italian university professor, several fellow doctors, some writers and artists and 'quite a large number of prostitutes and transvestite performers.'  Dr Burou almost never follows up a former patient's career."

Renée Richards famously came to Burou's door in the mid 1960s but then turned away.

In 1972 Bobbie Kimber claimed that she had had surgery with Burou in January 1970 - but examination of her body at death in 1993 refuted this.

And in fiction, Patsy Stone (played by Joanna Lumley) of Absolutely Fabulous, is said to have visited Casablanca in 1971.

Burou was a keen water-skier. He drowned under his boat at age 77.