One of Ackroyd’s first books was Dressing Up: Transvestism and Drag, the History of an Obsession, 1979, which I reviewed in September 2009. Strangely, while the 1979 book is listed in the bibliography at the end of the new book, it is not included in the list of the author’s works opposite the title page.

The new book concentrates on London, and is about all strands of LGBT. Ackroyd is openly gay and a widower: his husband died in 1994 – although this is not mentioned in either the book itself or on the cover. While some have wondered about why he chose transvestism as the subject of his early book, there are no rumours that he is a practitioner. In a 2007 interview in the Guardian, he commented: "Of course people assumed I was a transvestite, but you only have to look at me to know I'm not” – a comment that perhaps demonstrates his lack of knowledge of the subject. 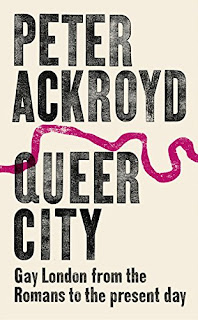 Ackroyd finds no trans persons of any flavour in Roman London, neither among the native Celts nor with the occupying Romans (although we do know that some Gallae did come to Britain). The earliest trans person mentioned is the prostitute Eleanor/John Rykener in 1394, and possibly the Pardoner in Chaucer’s Canterbury Tales. The age of Shakespeare provides a lot more named cross-dressers including the famed boy-actresses, but also female transvestites such as Long Meg and Moll Cutpurse. Into the 18th century and beyond various members of His Majesty’s Army and Navy were sometimes discovered to have been female born – Hannah Snell, Mary Anne Talbot, Mary Knowles, Christina Davies. This was also the age of the Molly Houses, of whose customers the most famous was Princess Seraphina. And also of Charlotte Charke and Peg Woffington who wore breeches onstage and off.

Of the 1979 book I wrote “He repeats the unreliable tales about Edward Hyde and Charlotte d’Eon de Beaumont”. Edward Hyde is not in the new book. Presumably Ackroyd became aware of Patricia Bonomi’s book that showed that all the evidence for his assumed transvestity is quite flakey. He still dubiously claims that d’Eon was “sent as a female spy to St Petersburg”. At which point I checked his bibliography. It contains none of the books by Gary Kates, who surely has become the authoritative source on d’Eon.

In the 19th century there is Walter Sholto Douglas, writer, James Allen, labourer, Lavinia Edwards, actress, the police raid of Druid’s Hall, Fanny and Stella, performers. But there is no mention of James Barry, the first trans doctor.

Discussion of trans persons in the 20th century is amazingly brief. A few minor incidents and the trial of John Radclyffe Hall’s The Well of Loneliness in 1928. You might expect that Ackroyd would then mention the trial of Victor Barker, only a few months later – but he does not. The two trials together acted as a double warning that masculine women/trans men had better be extra careful. Trans man Joe Carstairs, (not mentioned) among others, took the hint and left England a few years later.

The amazing thing is that this is the last trans item in the book. No later transsexual or transvestite of any gender or flavour is even mentioned. So there is no mention of Betty Cowell, April Ashley, Charlotte Bach, Caroline Cossey/Tula, Yvonne Sinclair, Rachael Webb, Sonia Burgess etc etc etc. And consequently there is no mention of the two big legal changes for trans persons in the UK: Corbett v. Corbett, 1969, which took away the civil rights of trans persons, and the Gender Recognition Act, 2004, which partially restored them.

A book sorely missing from Ackroy’s bibliography is Kris Kirk & Ed Heath’s Men in Frocks, 1984, (review) which is a London-centric account of gay transvestites and trans women who emerged from the gay scene between 1945 and 1984. It is difficult to imagine why Ackroyd chose to ignore this excellent book, and thereby mentions none at all of the many persons featured within it.

In 2009 I wrote that “He always writes ‘trans-sexual’, but has little interest in them as opposed to transvestites”, and “He writes (p107) "Coccinelle, the male cabaret artiste” and nothing else about her, totally ignoring her transition”. This disinterest-aversion seems to be continued in the new book, for it is after 1928 that hormones and genital surgery became available, and apparently Ackroyd does not want to get into any of that.

Furthermore none of the informative books by Peter Farrar such as Cross dressing between the wars: selections from London Life, 1923-1933, 2000 nor Liz Hodgkinson’s Bodyshock: the truth about changing sex, 1987, are in the bibliography and thus the tales of the persons mentioned in them are also missing.

Ackroyd tells of kings who were gay, especially James I of England/VI of Scotland. However he is quite disinterested in 20th century Members of Parliament who were gay such as Jeremy Thorpe, who put on trial for ordering a hit on his boyfriend, Edward Heath, Prime Minister 1970-4, Tom Driberg, Labour MP, Peter Mandelson who was in Blair’s cabinet and Lord Boothby who both had an ongoing affair with the wife of Prime Minister Harold Macmillan and consorted with gay criminals especially Ronnie Kray. These and more are discussed in Closet Queens: Some 20th Century British Politicians, 2015, by Michael Bloch. This again is not in Ackroyd’s bibliography

Queer London is easily readable, and is best on the 17th-19th centuries. However as I have indicated there are some serious gaps in the material. Caveat lector.

Simon Callow in the Guardian
Time: 15:04