Frances Anderson was the first female billiards champion, from the 1890s. At that time there were very few women's touraments.  Frances, from Kansas or Indiana, offered $5,000 to any woman who could beat her, and went undefeated for 25 years. She also beat most of the men whom she played against.  She was paid well for her appearances, taking on challengers and giving exhibitions, even into the 1920s, and toured North America and Europe. 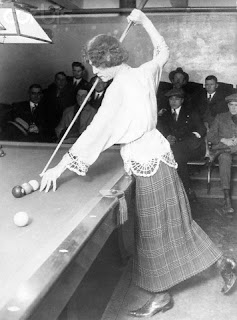 By the late 1920s she was aging, and her nerves and eyes were letting her down, and was often ill.  She wasn't the first professional billiards player to take the suicide route.   She chose her end in a hotel room in Sapulapa, Oklahoma in 1928.  Only when her body arrived at the mortuary was it discovered that she was male-bodied.  A Mrs W.D. May (née Anderson) read the newspaper accounts and travelled to Sapulapa to identify the body, whom she claimed as her missing brother, Orie.  She produced an 18-year letter and the writing matched writing by the deceased. The body was released to the Anderson family who took it back to Newton, Kansas for burial.

* not the art therapist.

Frances had lived exclusively as female for 40 years, and owned only female clothing.   She was obviously a trans woman, but newspaper journalists in 1928 were not aware of such a concept.