Toni grew up with three older sisters, and was frequently also taken to be a girl. The parents were embarrassed by this and kept Toni out of school, and locked Toni in the bedroom when relatives came to visit. 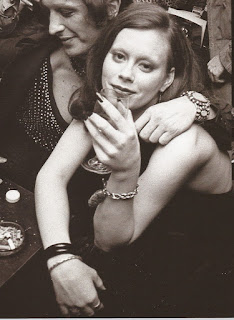 At 16 she ran away to San Francisco and joined the psychedelic drag troupe, the Cockettes, where she was known as Bobbi Cameron, sometimes Bobbi Venus. Bambi Lake describes her as looking like a 1930s Vogue magazine evening-gown model; Judy Carne says that she looked like Rita Hayworth.

Bobbi was in two of the Cockettes films: she played the lead role in Tricia’s Wedding, 1971, and was Cynthia in Elevator Girls in Bondage, 1972. Then she was recruited by the Chilean director, Alejandro Jodorowsky for a role in The Holy Mountain, 1973, as the factory girl seduced by Fon, the boss.
Actress Judy Carne visited the set of The Holy Mountain, and befriended Toni, who was already taking female hormones.  Judy accepted to play Sally Bowles in Cabaret in Toronto, and hired Toni as her personal assistant to help with makeup and wardrobe. She discovered that Toni had never learned to read, and taught her how.

Judy took a bad fall and completed the gig singing from a wheelchair. When the show moved to Chicago, she suggested Toni as a replacement for one of the chorus girls who had had to drop out. Toni’s number was ‘Two girls’, but she unfortunately sang it a few octaves too low, and one of the newspapers ran a headline: “In Cabaret, not all the Girls are Ladies”.

Homophobic catcalls started coming from the audience. Local restaurants refused service to the cast, and their landlord tried to evict them. Judy lost several gigs in the next year or so.

Toni had genital surgery in Los Angeles. Later she married either a cop or a dentist in Las Vegas, and became the lead showgirl at the Tropicano. It is rumored that she had a brief affair with Sylvester Stallone, and had a small part in Star Trek: The Next Generation.

Bambi calls her Bobbi; Judy calls her Toni.   I used Bobbi Cameron as the  title of the article as it is the name used in IMDB.