Albert Ellsworth was born in Yakima, Washington State, to a teenage mother, Mildred Sweet (1911-1955) and her husband Albert Ellsworth (1906-1990). They were told that the child was not expected to live, and relocated to Redmond, Washington. Subsequent enquiries to the hospital re the child went unanswered.

Neglected, the baby was cared for by a French aristocrat, Germaine Bonnefont (1894-1983) a teacher of French and Spanish, and her US husband, Robert Brown, and in the 1930 census he was listed as their son Bobby Brown. They took the young boy to France, although without the formality of adoption.

Brown returned to the US alone in 1932, and to his work in the forestry service, but came down with liver damage, and died.

Albert was raised in Narbonne close to the Spanish border and grew up tri-lingual. He was educated as a Catholic and lived at the Chateau du Lac south of Narbonne. The Bonnefont clan were acquainted with exiled Russian aristocracy, including  Felix Yusupov (1887-1967) transvestite and assassin of Rasputin. They had connections with the Francoist regime in Spain and were supporters of the Vichy regime during the German occupation: some joined the Waffen SS and died defending France from the Allied invasion in 1944; others were killed after the Liberation of France.

In the ensuing chaos, Albert came to the attention of the new government in Paris, and after scrutiny of his documents, it was determined that he was a US citizen and he was sent back to Yakima on the SS Argentina in 1946. He was upset that US customs confiscated his portrait of Hitler.

He was then 17, and had no memory of his birth mother who was still only in her mid-30s. They had sex and a sister-daughter Rosalyn was born, although by then Albert had left and did not know about the child. After living rough, Albert was saved by the Portland, Oregon Catholic charity, Blanchet House. They arranged educational scholarships and Ellsworth was able to do a BA and a masters at the Catholic University of Portland (not to be confused with the Methodist Portland University or with Portland State University).

Germaine reinvented herself as a veteran of the French Résistance, and arrived in Portland in 1947. She later lived in British Columbia.

Ellsworth did a doctorate at the University of Bordeau. He was employed to teach history, French and Spanish at Portland State University. He took a wife, Helen, and they had three daughters. In 1964 Ellsworth was hired at the newly formed Portland Community College, and stayed the rest of his life.

Albert was cross-dressing in private.

One of his students was Billie, the wife of the progressive judge Raymond Shoemaker. They fell in love and Albert abandoned Helen. The Judge and Mrs Shoemaker welcomed him and the three lived ménage a trois, and traveled together until the Judge died in 1977. Billie came down with cancer in 1990. Albert and Billie married so that he would inherit the house.

Shortly after Billie’s death, Albert married Sandra, a close friend whom he had known for decades, who worked in administration at Portland Community College. However Ellsworth started talking about changing sex, and in 1994, transitioned on the job at the age of 66. She was one of the first patients of surgeon Toby Meltzer who had started performing vaginoplasty in Portland, only the year before. Her legal name became AJ Bobbie Ellsworth, but she was from then generally known as Babette. 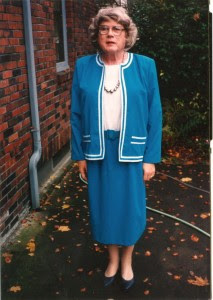 Sandra could not relate to this and they were divorced shortly afterwards.

In 1998, Babette made an arrangement with one of her students, Ross Eliot, food and board in exchange for chauffeuring and other assistances.  Bills and other mail arrived addressed to Albert Ellsworth. "My professor smiled mischievously when I asked about this. Albert? Oh, he was my husband. Some people suspected I had him murdered. This suggestion made her laugh."

In 2002 Babette was contacted by the long lost Rosalyn, who came to visit her sister-father. While she was there, Babette died of a massive heart attack while entering a bus for a student tour that she was to lead. She was 74. 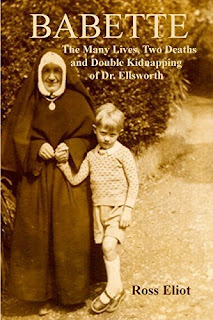 AJ Ellsworth is not listed among the Notable alumni of the University of Portland, nor among people from Portland nor among the faculty at Portland Community College.

Ross Eliot does not find out until p118 that Albert Ellsworth is Babette rather than her dead husband.  "Oh please! Ross?  You've seen her without a wig.  Ladies don't go bald that way.  And you know how deep her voice is.  Plus, come on, no real woman her age has tits that perky."

Craig Snyder apparently omits the middle wife, and gives a different name for the 3rd.


Craig Snyder’s page on Germaine Bonnefont says that she and Robert Brown adopted two sons, the other named as Robert John Pierre. Ross Elliot in his blog entry on Ellworth’s FBI file (http://profellsworth.com/news: May 4, 2015) gives this name as an alias of Babette.

I cannot find any account of Judge Raymond Shoemaker.
Time: 19:14