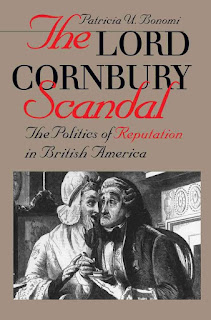 Part I: the claims
Part II: the actual evidence


The only detailed biography of Edward Hyde is:

She had earlier published articles that became part of the book: in The William and Mary Quarterly and in the Times literary Supplement.

What is the actual evidence, or what passes as such from the 18th century?

During Edward Hyde’s governorship, three colonists wrote letters that alleged that the governor did transvest.


Robert Livingstone returned to Albany County, New York in 1706 after three years in London. He wrote to the Treasury office the next year that he had heard such extraordinary stories


“that I durst not attempt to give your honour an account of them as not being possible to be believed … Tis said that he is wholly addicted to his pleasure … his dressing himself in womens Cloths Commonly [every] morning is so unaccountable that if hundreds of spectators did not dayly see him it would be incredible.” (p158)

The first, dated from internal evidence to 1707:


“the Scandal of his life is … he rarely fails of being dresst in Women’s Cloaths every day, and almost half his time is spent that day, and seldome misses it on a Sacrament day, was in that Garb when his dead Lady was carried out of the Fort, and this not privately but in the face of the Sun and sight of the Town”.


“of whom I must say something which perhaps no boddy will think their while to tell, and that is his dressing publiqly on womans Cloaths Every day and putting a Stop to all publique business while he is pleasing himself with that peculiar but detestable maggot”. (p159-160)


“My Lord Cornbury has and dos still make use of an unfortunate Custom of dressing himself in Womens Cloaths and of exposing himself in that Garb upon the Ramparts to the view of the public; in that dress he draws a World of Spectators about him and consequently as many Censures, especially for exposing himself un such a manner all the great Holy days and even in an hour or two after going to the Communion.” (p161)

Who painted the portrait and when, exactly, is unknown. It was discovered in England, not in New York. It was found in the family collection of the Pakington family in Worcestershire ( a family not associated by either marriage or blood with the Hyde family).

After almost a century the rumours about Hyde had died down, and been forgotten. In 1796, the writer – and lover of gossip, Horace Walpole (himself given to occasional transvesting), and a fellow gossip, Gilly Williams visited Sylvester Douglas, Lord Glenbervie. They talked of the society beauty, Catherine Hyde (1701-1777), Duchess of Queensbury by marriage, the daughter of Henry Hyde, Edward’s cousin, who became the 4th Earl of Clarendon. From there the conversation drifted to Edward.

As Douglas recorded in his diary: Walpole repeated the rumour that Edward Hyde in New York had dressed to represent his queen. Williams added extra, otherwise unrecorded, and not repeated by later writers. His father


“told him that he had done business with him [Hyde] in woman’s clothes. He used to sit at the open window so dressed, to the great amusement of the neighbours. He employed always the most fashionable milliner, shoemaker, staymaker, etc. Mr Williams has seen a picture of him at Sir Herbert Packingington’s in Worcestershire, in a gown, stays, tucker, long ruffles, cap, etc.”

The very next year, 1796, a letter to an art cataloguer from the son of Lord Sandys of Worcestershire described one of the paintings as “The Second E. of Clarendeon in womens’ cloaths”. Edward Hyde was of course the 3rd Earl. His father Henry was the 2nd.

1795-6 was a time was transvesting was topical in that Charlotte D’Eon having returned to England, was living as female and giving exhibition fencing matches.

There was no further claim of a painting of any Earl of Clarendon transvesting until 1867 when the painting that we now know was publically displayed in an exhibition of national portraits at the South Kensington Museum (now known as the Victoria and Albert Museum). For the occasion, a label was attached. However it was not a usual art curator’s description, but a quotation (see Part I) from Agnes Strickland. Strickland, in her books, Lives of the Queens of England, had given only one source [also not repeated in later claims], a letter written in Hanover in 1714 by German diplomat Hans Caspar von Bothmer who was the Hanoverian representative at the court of Queen Anne. Bothmer supposedly repeated a rumour that Hyde, while in ‘the Indies” dressed to represent his queen. This letter is unknown other than for Strickland’s claim.

The New York Daily Tribune reported on the exhibition. It discussed the painting, and repeated the quote from Strickland. This was the first mention of the painting in New York or elsewhere in North America.

Is the painting of a man or a woman?

Bonomi quotes Robin Gibson of the National Portrait Gallery, the expert on the Hyde family paintings known as the Clarendon Collection. Of the painting that we are considering: “I feel certain that the so-called portrait of Lord Cornbury is a perfectly straightforward British provincial portrait of a rather plain woman circa 1710.


” The painting was unlikely to be done on the colonies. .. Although I do not think it would be possible to identify either the artist or the sitter of the portrait in question, it seems to me the sort of portrait which might have been painted of a well-to-do woman living well outside London society, perhaps in the north of England. It is not necessarily of a member of the aristocracy.”

Could it be a caricature of Hyde?

“Caricature portrait paintings (certainly in Britain at this date) are unknown to me and extremely rare at any time. Any caricature would have taken the form of an engraving or drawing.” (p19)


The painting in New York

The painting was put up for auction in 1952, and was then acquired by the New York Historical Society, where it is now on display.

Here is a portrait, probably of Edward Hyde, in 1681, when he was 19. Compare the faces. Does it look like the same person? 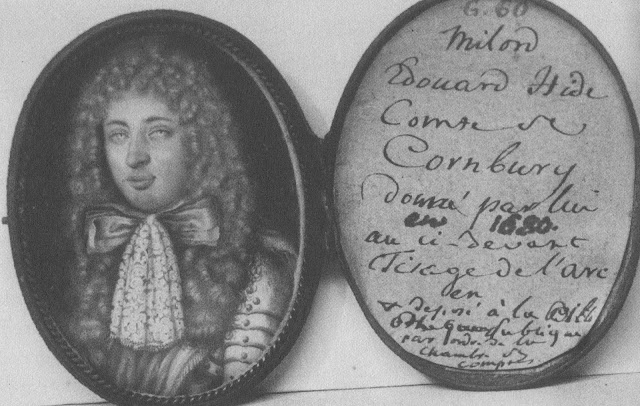 And here is a portrait of Henry Hyde, the future 2nd Earl of Clarendon, in 1643 when he was 4.  Could this have been the picture referred to by the son of Lord Sandys? 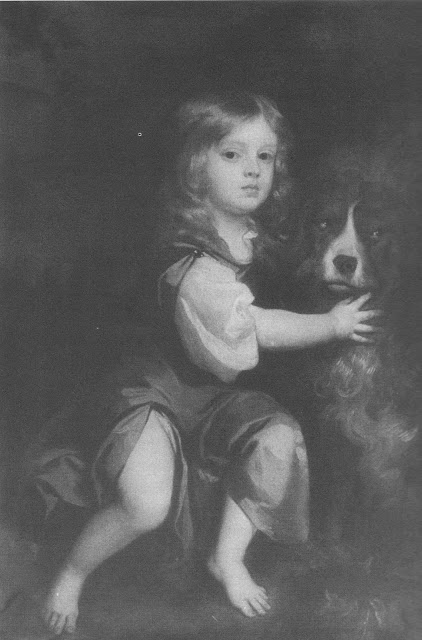 None of Livingstone, Morris and Neau say that they actually saw Hyde dressed in ‘womens Cloaths’. Nor do they name any person, of any rank who so saw. This despite the claim that Hyde had transvested before the full New York Assembly, and on the city ramparts.

In a court of law ‘evidence’ such as this would be dismissed as hearsay, and not admitted.

Incidentally not one of Livingstone, Morris and Neau is quoted by 20th century writers who tell of Edward Hyde.

The letters, sent to authorities in London, were not acted on. The claims were not consistent with other accounts, and as said, no witnesses were ever named or recorded. Hyde returned to England in 1710 and was appointed to the Privy Council and named first commissioner of the Admiralty. Even his kinship to the Queen would not have permitted this if he were regarded as scandalous.

Bonomi points out (p161) that other Governors in the same period were involved in scandals. Let us take the case of Francis Nicholson who was Governor of Virginia 1690-2, 1698-1705. The account in Encyclopedia Virginia is:


Meanwhile, his persistent and unsubtle courtship of the beautiful eighteen-year-old Lucy Burwell turned Nicholson into a laughingstock: In a speech to the House of Burgesses on September 22, 1701, Nicholson professed his admiration "for the Natives" of Virginia, "in particular but principally for One of them," but his marriage proposal to Burwell, daughter of the wealthy and influential Major Lewis Burwell of Gloucester County, was refused. The governor only made matters worse when he continued to publicly pursue Burwell even after she had become engaged to the equally privileged Edmund Berkeley II of Middlesex County.

Hearing rumors of Nicholson's political and personal missteps, authorities in London requested that a Virginian named Robert Quary investigate the various complaints against the governor. Although Quary's report was highly supportive of Nicholson and dismissive of his opponents, it did give the impression of being so biased toward the governor that it resulted in Nicholson becoming even less popular within the ranks of the colony's most influential residents, among them Robert Beverley II. In May 1703 six members of the governor's Council requested that the Crown remove the governor from office, asserting that he was a man of poor personal character, and thus was not an appropriate choice to serve as the monarch's representative in the colony. Following lengthy debates in London, the imperial authorities dismissed Nicholson from his governorship in April 1705, replacing him with Colonel Edward Nott.

It is well established that the terms ‘gay’ or ‘faggot’ are often used to put down men who are not at all gay. Here are some examples of politicians said to be trans when they were not at all so.

In 1988, Jonathan Falwell, son of Moral Majority leader Jerry Falwell, put out a comic book showing the Democratic candidate, Michael Dukakis in drag, (see Marjorie Garber. Vested Interests: Cross-Dressing & Cultural Anxiety, 1992: 54 – there is no longer anything on the web about this comic book).

Also 1988, a painting by a student, David Nelson, showed the recently deceased mayor of Chicago, Harold Washington, in female underwear. This caused a brouhahah, the painting was seized, and damaged before being returned. EN.Wikipedia.

In 2016, Alex Jones got a lot of mileage in the press when he claimed that Michelle Obama is a trans. Online.

It is unproved at best that Edward Hyde did as was said in the scurrilous rumours.

Certainly any claim that he did so made after 1998 that fails to discuss Bonomi’s book is deserving of no attention at all.