The next year Joe commissioned the best motorboat that money could buy, a hydroplane from Samuel Saunders of East Cowes, Isle of Wight. Joe named the boat Gwen after his lover, Gwen Farrar. After the boat capsized and came up again, Joe reversed the name to Newg.

At the end of 1925, Joe and his girlfriend/secretary, Ruth Baldwin, took a skiing holiday in the Swiss Alps. Ruth bought for Joe a German leather doll, just over a foot high. Joe called it Lord Tod Wadley, and it stayed with him all his life, except for the boat races, in case they capsized. Joe and Ruth lived on different floors in a house in Chelsea, with a cook and a maid.

Saunders offered Joe the services of his chauffeur/mechanic, Joe Harris. The two Joes became devoted to each other and Harris rode as mechanic in almost all Carstairs' races over the next five years.

They took part in the Duke of York’s International Trophy, and in 1926 after most competitors had fallen out, the Newg's propeller was caught by a submerged rope, but Joe managed to cut the rope, and completed the course to win the trophy (a year earlier than Violet Morris' win in the motor racing Bol D'Or).

The press took to referring to Joe as "Betty", even though that was not his female name, and it was a name that he strongly disliked.

In 1927 Joe commissioned Samuel Saunders to build three hydroplanes designed to be the fastest craft ever at a cost of £50,000. In a significant lapse of memory, Joe named the boats Estelle I, II and III after his mother Evelyn.

Estelle I sank on its first outing. Joe took Estelle II to Detroit to compete in the 1928 Harmsworth Cup. He posed for the local press. One newspaper wrote:


"A puzzler: Mannish: This picture you might accept as that of a male movie star, might you not? It isn't."

Another paper ignored what they saw and described Joe as 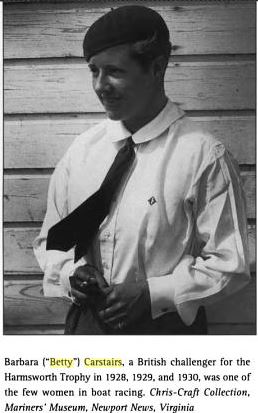 The press copied their colleagues in England and insisted on referring to Joe as 'Betty'. The New York Times usualyy stuck with "Miss Marion Carstairs".

In the race both Joes were thrown into the water and had cracked ribs. Joe Carstairs went dancing that evening nevertheless.

Carstairs then set up his own boatyard in East Cowes with Joe Harris as chief engineer. Estelle IV was entered in the 1929 Harmsworth Cup but hit a log.

The trial for obscenity against Radclyffe Hall's The Well of Loneliness had been in November 1928, and 1929 saw both Victor Barker's trial for making a false statement on a marriage certificate and Violette Morris' failed legal case against the Fédération française de sports féminins. The tide was turning against masculine women.

At the 1930 Harmsworth Cup, the Estelle V set an American speed record, but broke down in the actual race. Carstairs had spent $500,000 attempting to win the Harmsworth Cup, but now conceded defeat.

Back in England, Joe contributed £10,000 towards a racing car for Malcolm Campbell which set a new land-speed record, and Campbell was knighted. Campbell described Joe Carstairs as


"the greatest sportsman I know".

Joe participated in a few more races, but without success. Carstairs provided Joe Harris an income in perpetuity, and attended his bedside when he lost his legs in old age.

Joe, Wadley and Mabs Jenkins, a manicurist, set out on a 15-month world tour. In India they both shot a panther. In Ceylon a man acted as batman to Joe and Mabs. He asked Joe's permission to marry, and Joe gave him a lifetime income.

On return Joe still built boats, but no longer for racing.

Additional reasons for a move were that Joe was having to face a large bill in England in that he had never paid any income tax, and that his relationship with Ruth Baldwin had broken down, and there was a growing hostility in the press.

"I want to be left alone" he was quoted, two years after Greta Garbo had used the phrase in Grand Hotel, 1932.