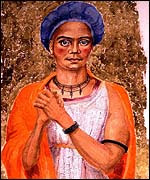 for ancient transpersons is usually a line or two in some writing that happened to survive. So it was especially noteworthy in 2002 when archeological evidence was found.

The archeological dig at Catterick in North Yorkshire, near the Roman military base, revealed the skeleton of a castrate dressed in women’s clothes and jewellery. She is believed to be a gallus dedicated to Cybele. She was buried with two symbolic pebbles in her mouth, in case she needed her virility back after death.