Unless otherwise noted, page references are to The Sexual Century.

Person and Ovesey follow the old psychoanalytic tradition of referring to trans persons by their birth gender, and thus a heterosexual trans woman is in their terminology a ‘male homosexual’. 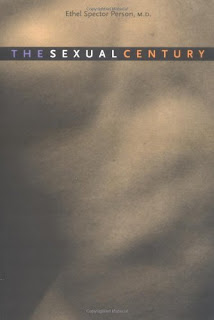 Person and Ovesey were influenced by the development model of psychoanalyst Margaret Mahler, and from this proposed that a child's separation-individuation anxiety produced a fantasy of symbiotic fusion with the mother which the transsexual tries to resolve by surgically becoming her mother.


“The male transsexual is defined by most workers as having a female core gender identity. From our experience, it seems more accurate to say that transsexuals have an ambiguous core gender identity. … [this] permits the disorder to be conceptualized psychodynamically in conflictual terms as a neurosis. In our opinion, transsexualism originates in extreme separation anxiety occurring early in life, before object differentiation has been accomplished. To alleviate the anxiety, the child resorts to a fantasy of symbiotic fusion with the mother. In this way, mother and child become one and the danger of separation is nullified. We believe that this reparative fantasy is the psychodynamic basis for transsexualism in the male and that the transsexual phenomena can be understood clinically as attempts to ward off threats to psychic fusion with the mother.” (p 107-8)

They proposed a typology of transsexuals as follows (as summarized by Vitale):

1 Primary - functionally asexual and who progresses resolutely toward a surgical resolution without significant deviation toward either homosexuality or heterosexuality, no evidence of effeminacy in childhood.

2a Secondary, homosexual - effeminate from earliest childhood, preferred girls as playmates, avoided boyish pursuits and were "mother's helpers." Crossdressing began in childhood, initially for narcissistic satisfaction, but later at puberty to attract male sexual partners. Cross-gender fantasies were frequently tied to identification with movie actresses and drag queens. The authors note that the homosexual cross-dresser wants to be noticed and to this end often wears flamboyant and colorful clothing and engages in theatrical endeavors.

2b Secondary, transvestic - appropriately masculine, and occasionally exceedingly hyper-aggressive and hyper-competitive. They neither played with girls nor engaged in female pursuits. They fantasized about being girls when cross-dressed, but valued their assertiveness and maleness.
This typology was in contradistinction to Stoller’s writings where the homosexual early transitioner was regarded as primary.

With regard to trans men, Ovesey and Person write:

a) passive effeminate homosexuals who


“in many ways present a caricature of typical female norms. They are interested in such things as cooking and decorating, but most of all, they seek a love relationship with another man where they can assume the female role. … on the surface they are passive and dependent, but they often dominate their mates through oversolicitousness. In this respect they, they tend to duplicate the close-binding behaviour frequently ascribed to their mothers. Often a relationship is terminated because the lover feels suffocated.”

b) the more aggressive, though equally effeminate, drag queens. They

Two examples are given: C. a 33-year-old who lives with mother and has worked only two years in his life. He met a man in Spain while on holiday and maybe the man would marry him if he had the operation. D. works as a drag queen and also turns tricks. His family know that he is gay, but not the rest. He has lost interest in sex, but hopes that post-op he would find a ‘real man’.
(p 127-135)

“transvestic transsexuals have the typical personality structure of their parent group, transvestites. The personality is organized on an obsessive-paranoid axis with attenuation of both tender affectivity and sexuality. These patients are hypercompetitive, may be hypermasculine, and engage in endless struggles for power with other men. … The relationship with the wife is essentially dependent. As such, its success is determined by the personality of the wife and her capacity to tolerate both cross-dressing and minimal sexuality. … Mental life is characterized not only by irritability and preoccupation with power struggles but also by bouts of depression. … they are countered most frequently by cross-dressing and many instances by resort to alcohol. … Suicide attempts are common, as we would expect in a patient population so prone to depression.” (p135-142)

Person and Ovesey went with the definition that transvestism is done by male heterosexuals (not gay men nor women) for fetishistic sexual arousal, although they concede that it may also be done ‘to relieve anxiety about gender role identity’. They divide transvestites into masochistic and non-masochistic. The psychoanalyst Milton Jucovy had proposed the concept of ‘initiation fantasy’ as a central part of male transvestism. Person elaborated that there are two versions: forced initiation by a dominant, big-breasted, booted phallic woman, and also initiation by a kindly woman who dresses the man to save him from ‘Mafia killers’ or some such.

In 1978 the Archives of Sexual Behavior published Virginia  Prince's "Transsexuals and Pseudotranssexuals" in which she proposed that the only true transsexuals are asexual, socially-inadequate men who would function better as women, as "less is expected of women". She presumed that bisexuals (2,3,4 on the Kinsey scale) of their nature do not become transsexuals. She also proposed two kinds of 'pseudotranssexual' based on sexual orientation.

The third edition of the Diagnostic and Statistical Manual of Mental Disorders (DSM III) 1980 added transsexualism for the first time, and subdivided it into asexual, homosexual, heterosexual and unspecified. Thus it was roughly congruent with Stoller, Person-Ovesey and Prince. Furthermore ‘transvestites’ was defined as done by a heterosexual male. Again congruent with Stoller, Person-Ovesey and Prince. However to the chagrin of Prince (who had been insisting on a differentiation from fetishism) it was defined as done for sexual excitement.
EN.Wikipedia
______________

I have previously commented on similar attempts at typology. See Kay Brown androphilic and gynephilic, and Anne Vitale. I still think that 3-part typologies of transsexuals are better than Blanchard’s 2-part – but I am certainly not recommending the Person-Ovesey model. Vitale’s model regards the pathology as gender deprivation anxiety - non-standard gender identity as such not being a pathology. Thus Vitale’s approach is preferable if we are to continue with typologies. Those who transition as soon as possible, those who spend some time living as gay before transition and those who marry and have children before transition are intuitively three different types. However to define the three types by adding psychoanalytical interpretations and to ignore the great variety within each type ends up defaming all and sundry. The intuition of three types does lead to some valuable insights, but to reify the three types leads to severe distortion.

In part I, I mentioned Elizabeth who writes Notes from the T Side. Apparently she is a Benjamin VI (High Intensity True Transsexual), a Vitale G1 and a Stoller Primary; but a Person-Ovesey Secondary and a Prince Pseudo-transsexual. This is an excellent example of how typologies should not be taken literally.

I am not aware of any trans persons who actually identity with the Person-Ovesey model. Rachel Webb identied as a ‘constructed woman” as per Janice Raymond; Kay Brown and Kiira Triea identified as Blanchardian HSTS; Anne Lawrence, Willow Arune, and probably Maxine Petersen self identify as autogynephiliacs. But no-one has in public identified as a Person-Ovesey secondary transsexual.  This despite the fact that the Person-Ovesey papers came out over a decade before Blanchard's.

It is difficult to reconcile the portraits of all three types of transsexuals as described by Person-Ovesey with the range of creativity and achievement of individuals featured in this Encyclopedia. Apparently Person was charming and easy to get on with face-to-face. However when you read the descriptions of trans persons in her book, then obviously she was not so nice.

Furthermore, the typology that Person-Ovesey come up was far from original.   In its basic structure adheres closely to street stereotypes current at the time.   All Person-Ovesey really did was revise the psychoanalytic dialectic to support the model.   This despite Person being credited for doing field work in porn shops and transvestite parties!   How come she never saw those of us who do not fit into the model - and I strongly argue that those of us who do not fit are the majority.   She must have worked at ignoring those of us.   This is later called erasure.   Yes, there are some trans people who are like those described.   There are some who have the separation-anxiety neuroses described.   There there are even more who do not.

I have not found any record of Benjamin’s reactions to the 1974 Person-Ovesey papers on Primary and Secondary Transsexuals.

We should remember that two decades earlier, Benjamin had provided a few of his patients to Federick G Worden & James T Marsh who quite disappointed the volunteers and in effect refused to listen to them, because they thought that they knew in advance what transsexuals were.

The New York Times obituary says: “Her work, upsetting the conventional thinking, found that many transsexuals and transvestites did not perceive themselves as homosexuals but rather saw themselves in many different lights — sometimes, for example, as a woman trapped in a man’s body, and sometimes as a heterosexual who preferred a feminine demeanor.” Surely this and more had been established by Magnus Hirschfeld over 50 years before.

Molly Hacker commends Ethel Person in her book about her trans sibling. But did she never read Person’s book? Does she actually regard her sibling as a ‘transvestic transsexual’, in effect a fetishist? If she does not, how can she commend Person in her book?

This is Anne Vitale’s summing up of Primary and Secondary Transsexualism: