A rereading of Benjamin: Part 1: intro and the Scale

Harry Benjamin's book is now 50 years old.    This is the only close reading of the book available. 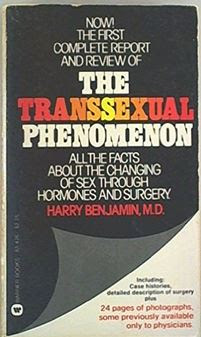 The book is dedicated to Mrs Benjamin, Gretchen, and appreciations are given to G.R. Lal and R.E.L. Masters who each wrote an appendix, Richard Green who wrote an appendix and the bibliography, Arthur Ceppos president of Julian Press (who also published Ron L Hubbard and John Lilly), associates Leo Wollman and Wardell Pomeroy for advice and assistance, Richard Levidow, attorney (who would later be the attorney for the Queens liberation Front), for advice on the legal chapter, Robert Laidlaw and Johannes Burchard, psychiatrists for encouragement, Brooking Tatum for editing the book, and to Reed Erickson for financial and moral support. John Money and Virginia Prince who are mentioned in the book are not mentioned in the appreciations.

While there had been several previous books about transvestism, there had been only two previous books specifically about transsexuality, both, as it happened, by persons themselves transsexual: Self: A Study in Ethics and Endocrinology, 1946, by Michael Dillon, and Over the Sex Border, 1963, by Georgina Turtle. Neither of these are mentioned by Benjamin, although Turtle's book is included without comment in Green's bibliography.

The word 'transsexual' first appeared in English in Alfred Kinsey, Wardell Pomeroy & Clyde Martin.  Sexual Behavior in the Human Male, 1948, as a kind of homosexual considered as an intermediate sex.   The next year, 1949, David Cauldwell wrote a paper for Sexology about a girl who wanted to be a boy. He entitled the paper ‘Psychopathia transexualis’ (note the one S). This paper was not much noticed. Harry Benjamin later commented: "Whether I had ever read that article and the expression remained in my subconscious, frankly, I do not know". It was Louise Lawrence who introduced Benjamin to Cauldwell’s writings.  The word also turned up in Edward D Wood's 1953 film, Glen or Glenda, just before Benjamin used the word in public.

Ira Pauly had been sitting in on Benjamin's Wednesday afternoon clinic with his transsexual patients, and in 1963 had read a paper before the American Psychiatric Association in St Louis: "Female Psychosexual Inversion: Transsexualism", and in 1965 had published "Male Psychosexual Inversion: Transsexualism. A Review of 100 Cases" in the Archives of General Psychology (13:172-181). In Sweden Jan Wålinder was working on his Transsexualism. A Study of Forty-Three Cases which would be published in 1967. 1965 had seen the publication of Abby Sinclair's I Was Male and Hedy Jo Star's My Unique Change. Neither of these are mentioned by Benjamin, but they are in Green's bibliography. In 1965 John F Oliven published Sexual Hygiene and Pathology, wherein he used the word ‘transgenderism’; he was omitted from Green’s bibliography.

In 1966, around the time of publication of his book, Benjamin referred Phyllis Avon Wilson to the Johns Hopkins Gender Identity Clinic. She is taken to be the Clinic's first patient to be operated on, and later that year she had become a dancer in New York, where she was outed in a gossip column and the press realized that there was a major story at Johns Hopkins.  Shortly afterwards, the Universities of Minnesota, Stanford, Northwestern and Washington at Seattle also opened Gender Identity Clinics.

Earlier in 1966, the British Medical Journal had published a leading article on transsexuality that summarized the field from the medical point of view. Christine Jorgensen's A Personal Autobiography would be published in 1967, and be filmed three years later.

By 1966, Candy Darling, Jackie Curtis and Holly Woodlawn had met each other, and Holly approached the Johns Hopkins clinic about TG surgery.   Others who first went to the clinics that year were the one-year-old Bruce Reimer and Barbara Dayton.   The National Academy drag pageant final 1967 would be won by Rachael Harlow, and the film version would become a sensation at the Cannes Film Festival.  Gore Vidal's Myra Breckenridge would be published in 1968; the Stonewall riots would be a year after that.

Benjamin is considered, in contradistinction to Cauldwell, as the major proponant of the 2-S spelling of 'transsexual'. He even writes ‘psychopathia transsexualis’ when referring to Cauldwell’s term.

Readers of the PDF version may assume that there is a switch, in Appendix D, to the 1-S spelling: 'transexual'. However this is a copying error. It remains 2-s in the printed version.

Chapter 1: The Symphony of the Sexes.

An earlier draft of this chapter was originally published as "Seven Kinds of Sex" in Hugo Gernsback's Sexology Magazine in 1961.

On the first page, Benjamin writes: " 'Gender' is the nonsexual side of sex. As someone expressed it: Gender is located above, and sex below the belt." p15/6 In the footnote on p65/42, he repeats this and attributes it to Virginia Prince.

Georgina Somerset, in her 1963 book, had contentiously insisted that chromosomes = sex. Benjamin is probably not replying to her in naming this chapter. While admitting that chromosomal sex is fundamental, he explains that 'sex' also has genetic, anatomical, legal, gonadal, germinal, endrocrinal, psychological and social aspects. Chromosomes are the one aspect that cannot be changed.

It has of course become a cliché of anti-trans writers to claim that one cannot change one’s chromosomes and therefore one cannot one’s sex. I was disappointed to find that Anne Vitale, who is otherwise trans positive, also makes the same claim.

Benjamin reminds us, p32/13, that in previous publications, he had divided all transvestites into three groups: 1) those who merely want to ‘dress’ and be accepted as women. 2) those who waver, who want breast development but shy away from surgery. 3) ‘fully developed’ transsexuals. Benjamin had arrived at this typology after observing over 200 patients, of whom more than half he diagnosed as transsexuals. He proceeds to discuss other doctors, p34/14, who divide by ‘sex feel’: heterosexual transvestites, versus transsexuals who “considers his sexual desire for a man to be heterosexual, that is, normal”. Benjamin does not mention, as many have since, that this approach erases all gay and lesbian sensibility. He does continue by commenting how trans patients are often bi, do change sexuality over time, or are apparently heterosexual because they do not wish to be seen as homosexual as well as tranvestic.  However what he does do is assign Kinsey Scale vales to each of his six types.

Benjamin proposes what he calls his Sex Orientation Scale. It contains “six different types of the transvestism-transsexualism syndrome as clinical observations seem to reveal them. While there are six types, there are seven categories listed on the scale, the first one describing the average, normal person.”

While he had criticized other doctors who divide by ‘sex feel’, he applies a Kinsey Scale number to each of his types. As Kinsey wrote it:

However as we are dealing with trans persons, we should rewrite it, as Benjamin did not:

1-5 are of course gradations of bisexuality.

Persons of any Kinsey type may be Type I Pseudo Transvestite. However a Type III True Transvestite is marked as Kinsey 0-2 (gynephilic) and thus gay transvestites have been erased. Gays also cannot be Type II Fetishistic Transvestite either (Kinsey 0-2), an assumption that was later built into the DSM-III-R 1987. By then homosexuality was removed from the DSM, but transvestism was now added: it was renamed 'Transvestic Fetishism'. As Prince had advocated, and Benjamin implied in his scale, Transvestism was defined as done by heterosexual males. Cross-dressing was not regarded as a transvestism when done by women or gay men. However, presumably to Prince’s chagrin, the psycho-analytic tradition that heterosexual transvestism was a fetish was accepted.

What about Type IV Nonsurgical Transsexual? The older Virginia Prince would presumably fit in here, but never agreed with the label. Louise Lawrence and Susanne Valenti also fit. It is marked Kinsey 1-4. Prince and her followers attempted to appropriate the term ‘transgenderist’ for this category, but never made the term their own. However should it not also contain non-surgical persons such as Holly Woodlawn, International Chrysis, Jayne County, Minette or Carla Antonelli who were presumably Kinsey 5-6? Does Benjamin assume that all such androphilic trans women would eventually opt for surgery.

Benjamin does not build early or late transition into his schema. Type V or Type VI may transition at 16 or 61. Early transition is not a requirement. Of course a Type VI High Intensity person would logically want to transition early, but in 1966 there were lots of trans women who had been desperately wanting transition for 30 or 40 years but the doctors, the clinics had not been available.

Note that Benjamin uses ‘Trapped in a male body’ to describe Type V Moderate Intensity. For Type VI High Intensity he uses ‘Total Psycho-Sexual Inversion’. This is not a distinction that later writers paid any attention to.

A footnote, p40/18, presents two alternate typologies. “After having devised the first S.O.S. chart, it was shown to two of the most earnest students of the transvestitic problem, both transvestites themselves, and they formulated charts of their own. In one, seven types were likewise recognized and recorded as follows”.

As the first contains the word ‘femiphile’, we can be fairly sure that its author is Virginia Prince.
Time: 15:00