In 1960 Jackie was picked out of the crowd by fellow-American Frank Motley at a gig in Montréal. Jackie became part of the band, The Motley Crew, which was based in Toronto, where they frequently performed at at the Sapphire Tavern. Jackie was a soul/R&B singer whose appearance was androgynous, often wearing makeup, and sometimes an evening gown. This at a time when homophobia was rife and taverns and clubs in Toronto had to close before midnight on Saturday as required by the Lord’s Day Act. Jackie’s type of show was new in Canada where the US black tent shows and the Chitlin Circuit with their traditions of drag performance were unknown. A rumour developed that Shane was cousin to Little Richard, but this was unfounded.


“Jackie Shane wasn’t bringing his act to Toronto so it could be better understood. Instead he was taking it out of context, to someplace where it seemed more alien and strange. Maybe he liked it better that way. By coming to Toronto he was escaping segregation and getting to perform to white people with presumably deeper pockets, who had never seen anything like him before. You could cross over in the States, but then you’d have to pull a Little Richard and turn your ‘freak’ show into a clown act, taking out the gay innuendo.”

Shane had only one hit record, “Any Other Way” which was released in April 1962, and reached No. 2 in Canada.  (Listen)

The words and emphasis were somewhat changed from that of the original versions by William Bell (video) and Chuck Jackson (video) which use the words as a man’s face-saving lie after being dumped. The new version reads like a gay woman's confession to a female friend, and in fact many listeners assumed that the singer was a woman.*

Between songs Jackie would talk to the audience:


"You know, when I'm walking down Young Street, you won't believe this, but you know some of them funny people have the nerve to point the finger at me, and grin, and smile, and whisper ... but you know that don't worry Jackie because I know I look good. You what my slogan is? Baby, do what you want, just know what you're doing. As long as you don't force your will and your way on anybody else, live your life because ain't nobody sanctified and holy."

Toronto’s gossip tabloid, Tab, told how Jackie was invited to a local radio station CHUM for an on-air chat, but they were so upset by Jackie’s makeup and attire that they cancelled the interview and did not play the record until it was at the top of the charts.

Jackie was listed in the 1964 Etta James Revue as ‘female impersonator’.

In 1965 Jackie appeared on the WLAC television show, Night Train, in Nashville performing “Walking the Dog”.


Frank Motley discontinued The Motley Crew in 1966, and formed a new band, The Hitchhikers. Jackie was performing in clubs across North America, and released a couple of live albums. 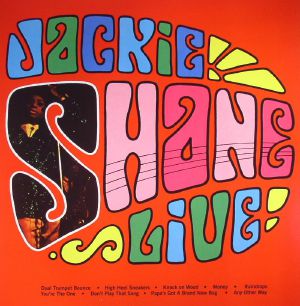 “Warning: This Album is not meant for squares! You’ve got to be down with it and can’t quit it, baby. … What are Jackie’s likes and dislikes? Well, you know Jackie likes ‘chicken’. Even when food is concerned Jackie likes chicken. The only problem is when Jackie suggests, ‘let’s go out, and get some chicken after the show’, you can’t be too sure what he has in mind. … You’ll feel energetic and ambitious when you here ‘Money’. You’ll be inspired as Jackie tells you his life story in ‘Any Other Way’.”

Talking in the live version of ‘Any Other Way’, Jackie says:


“You know what my woman told me one night? She said, ‘Jackie, if you don’t stop switchin’ around here and playing the field and bringing that chicken home, you gonna have to get steppin’.’ I said, ‘Uh huh,’ and I grabbed my chicken by one hand, baby, and we been steppin’ ever since that night.”

That year a woman wrote to the Toronto Star:


“My friend and I saw a group called Jackie Shane and the Hitchhikers, and she says Jackie Shane is a girl. I thought he was a boy.”

Shane’s last singles were released in 1969, which was also the last time that Jackie worked with Frank Motley; and she left Toronto in 1971, maybe because of problems with immigration officials, maybe because the club scene was changing.

After moving to Los Angeles, Jackie turned down an offer to be part of the band Funkadelic. Jackie began caring for an aged aunt.

After her mother’s death she and her aunt returned to Nashville. By now Jackie was living as a woman. Shane had become a legend, and it was even rumoured that she had been murdered in 1998.

After the airing of a CBC Radio documentary in 2010, renewed efforts were made to contact Jackie. A double CD was released. The 2017 anthology about queer Toronto is named Any Other Way after her single.

The Saphire Tavern from YZO on Vimeo.

*Jackie was a unisex name in the 1960s. Jackie Robinson was a baseball player; Jackie Kennedy was a presidential spouse.


Some of the sources say that Jackie was in drag for the 1965 Nighttrain performance.
Time: 14:16