Peter Drouyn grew up in Queensland. His father was a lifeguard and clothing retailer who also played saxophone; his mother a musician. He had a childhood fixation on Marilyn Monroe.

By age 11, he was surfing, and he competed in the Australian Junior Surfing Championship in 1965. Some New South Wales thugs assaulted him the night before and he needed stitches, but he competed and won anyway. Peter pioneered the short. 8’11” (2.7m) rather than the 10’ (3.05m) surfboard, but is not credited for this in the official histories. He was second in the National Surfing Championship in 1967, and in 1969 he had equal points with the former world champion Nat Young. He won convincingly in a surf off, but the title, to great controversy, was given to Young anyway on grounds of more consistency. He won the Australian Open Surfing title in 1970.

Peter can be seen in the 1971 film, Oceans, and a few other surfing films in the next few years including Drouyn, which was shot along the coasts of Mauritius, South Africa, Angola, the Canary Islands, Morocco, Hawaii, Japan, and Indonesia.

In 1971 he was accepted at the National Institute of Dramatic Art in Sydney. In 1977 he launched the surfing Stubbies Classic with a judging format known as ‘Man on Man’. He had a part in the first Australian Vietnamese War film, The Odd Angry Shot, 1979, and in plays and commercials. As part of promoting The Odd Angry Shot, he was a Cleo magazine centrefold. He studied Mandarin, and in 1985 he introduced surfing in China.

In 1989 Peter found a wife in South Africa, and they had a son, but divorced shortly afterwards.

The 1990s consisted of false starts and temporary jobs including a modelling school, driving a taxi, selling insurance, designing a wave machine, working as a sander in a cabinet factory, studying engineering and opening a surf resort in the Philippines.

In 2002 he had a surfing accident which left him concussed and with a perforated eardrum. Shortly afterwards he started experimenting with female clothing. By 2007 Peter was broke from caring for his 92-year-old father in a caravan, and was ostracised for denouncing the corruption in the sport.

While studying to be a lawyer, Peter stumbled on a biography of Marilyn Monroe, read it in one evening, and proceeded to identify with her:


“Both suffered panic attacks, both hated to be alone, both experienced paralysing bouts of low self-esteem, both studied method acting, both cited Marlon Brando and Clark Gable as their favourite actors, both spent two weeks in a mental institution, both tried LSD at exactly the same time. ‘About seven times in ten when I’ve looked down to my odometer in the last two years, the number 36 always comes up,’ declares Westerly. ‘Marilyn was 36 when she died!’

She goes on to say that Marilyn never felt she was taken seriously and neither did Peter; that Marilyn suffered gender identity issues; that Marilyn dreamed of being a lawyer, which is precisely Westerly’s vocation. ‘I didn’t even realise that ‘MM’ upside down is ‘WW’!’ ...

‘Yes, there’s no question about it, she’s [Marilyn] in me. And God has put her there.’

‘Well then who exactly is Westerly Windina?’

‘Westerly Windina is a person who has been placed inside of Peter Drouyn. She’s taken over his body. Westerly has left behind Peter’s fears. Westerly... She’s a comedian, she’s a singer. Westerly has a new life. I’ve been resurrected!’ 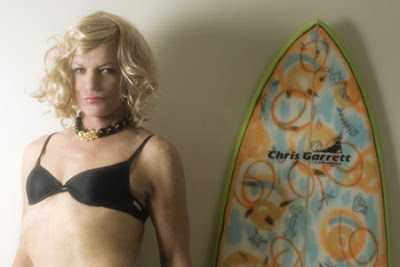 ‘You keep speaking of Peter Drouyn in the past tense. Is he gone for good?’ ‘He’s gone. He’s actually...’ She points a finger heavenward. ‘I think he’s up there with Mum and Dad.’ (Brisick)”

In 2008 Drouyn as Westerly Windina (from the joy of surfing the Gold Coast when the westerly wind is offshore) announced on national television that male hormones had drained away over a period of eight years and been replaced by female hormones, but that she had not taken any medications or artificial hormones. She is still in good shape and is able to wear a size-10 skirt.

She has opened a law firm.