He was trained as a ballet dancer, and at age 11 appeared in New York City Ballet Company production of The Nutcracker Suite in Los Angeles.

At 15 he ran away and worked in a gay bar in Sapporo, and then in Carrousel in Osaka. She had castration at age 19 and become a woman Hirahara Maki 平原 麻紀, and performed as Karūseru Maki (Anglicized as Carousel Maki), a name she took from the gay bar in Osaka, which in turn was named in homage to the Le Carrousel tours of Japan in the 1960s. 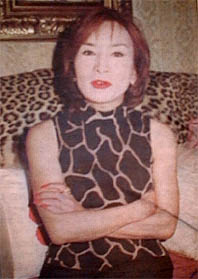 She had final surgery from Dr Burou in Casablanca in 1973.

She has acted in 11 films since 1969, and is a well-known nightclub performer.

In 2001, she was arrested for possession of drugs, and spent 41 days in a male jail because the family registry still listed her as male.

In 2002 she published her autobiography. Finally in 2004 she was able to be recognized legally as female under the new laws.

In 2006 her home was burgled and ¥8 million-worth of jewellery and ¥3 million in cash was stolen.
www.carrousel.co.jp    JA.Wikipedia      IMDB.