Mary Anne Talbot’s mother died in childbirth. She later claimed that she was the youngest of 16 illegitimate children of William Talbot (1710 - 1782), Lord Steward of the Household.

Mary was nine years in Mrs Tapperly’s boarding schools in London, ‘where she knew no happiness’.

In 1791 an elder sister died and left her an inheritance. A Mr Sucker was her legal guardian. He passed his ward, the 14-year-old Mary, to Captain Essex Brown, who quickly raped her. She felt that having no friends, she had no choice. Brown named her John Taylor and presented her as his footboy for a voyage to Santo Domingo.

They were at the siege of Valenciennes, 1793, part of the invasion of the new French Republic by the European monarchies. John was a drummer-boy and wounded. Brown was killed in the siege. From Brown’s papers, Taylor found that Sucker had squandered her inheritance, and so continued as a sailor. 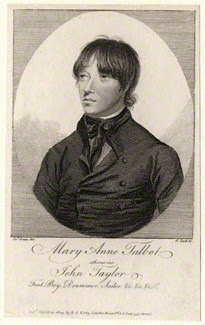 He was for a while a cabin boy on a French ship, but it was captured by the British. Taylor was wounded severely in the ankle in 1794 at the Glorious First of June/ Third Battle of Ushant/ Combat de Prairial, the largest fleet action in the Wars of the French Revolution, and never had full use of his leg again. Later that year he was captured by the French, and was 18 months in a dungeon in Dunkirk

After his return to London, he was seized by a press-gang, but released when he revealed that he was female-bodied. Although now regarded as a woman, he applied to the Naval pay office at Somerset House for a pension, and was finally granted 12/- per week. His leg wound got worse.

He visited Sucker and drew a sword on him, whereupon he confessed that the inheritance was all gone. He died three days later from the shock.

Taylor used his fame as a man-woman and his claim to be a child of Lord Talbot, to appeal for charitable donations. He found a common-law wife, worked in menial jobs, and even appeared on stage at Drury Lane theatre in both male and female roles. He was arrested for debt, and imprisoned at Newgate.

After release Mary Talbot became a household servant for publisher Robert Kirby who wrote about her in his book Wonderful and Surprising Museum. She died of ill health from complications from her wounds at the age of 30.
EN.Wikipedia