Franciolini was born in Rome. She was a pioneer trans activist as early as the 1960s. She established what was then the largest trans community in the Acqedotto Felice slums.

In the late 1970s she lived in Turin and founded a trans group there. 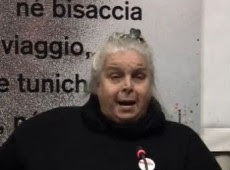 Roberta, along with Marcella Di Folco, Gianna Parenti and Pina Bonanno, founded Movimento Italiano Transessuali in Rome in 1979. Working with civil rights activists, but Roberta as the main animatrice, they struggled for Law 164 ‘Norme in materia di rettificazione di attribuzione di sesso’, which was passed in 1982 and provided legal recognition of a person's acquired gender.

They worked with the Radical Party. In the 1980s she struggled against police repression and AIDS. At the 1994 Pride rally she gave the rousing cry: “questi vermi che ci vogliono schiacciare devono andare via (these worms that want to crush us must go)”.