Chloe as Keith was a teenage champion equestrian in Connecticut. 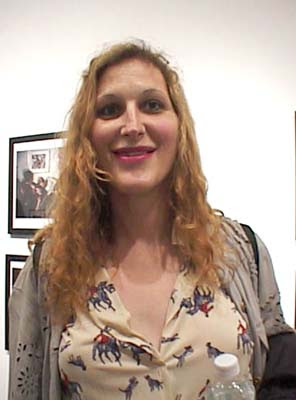 Chloe moved to Manhattan's East Village in 1982. She briefly worked at Studio 54. She became the ad director at the art magazine, East Village Eye, at a time when the local art scene was taking off. She became the partner of Bobby Bradley, one of the founders of the drag club, Pyramid, and was with him for nine years until he died of AIDS.

Chloe wrote and performed in a band with Antony Hegarty, and was the lead singer for the punk band, Transisters, which did songs about sexual abuse and being transgender.

She was photographed by Nan Goldin, Alice O'Malley, and Tanyth Berkeley, and also by David Armstrong, Steven Klein, and Michael Sharky. She was diagnosed as HIV+ in 1987, and later suffered from avascular necrosis. In 1993 she completed her transition to Chloe.

She was a long-time volunteer at the LGBT Community Center's Gender Identity Project. She was also part of Transsexual Menace, and directed one of the first federally funded HIV prevention program for transgender sex workers in 1997.

Chloe studied at the Parsons School of Design, and completed an associate degree in Gender Studies at the City University of New York in 1999.

Chloe encountered much ignorance and sheer prejudice by health professionals treating trans persons even when the problem was neither HIV nor specifically trans issues, including sudden dropping of treatment and refusals to answer.

As she was an AIDS activist, Mayor Bloomberg put her on New York’s HIV planning board, where she pushed to separate trans from gays in the HIV statistics.

She was on the cover of POZ magazine in August 2004 as "Trannie get your gun", a theme that she proposed. In the article she declined to identify as female, preferring to stay outside the 'binary gender construct'.

Later that year she had the hip replacement required by her avascular necrosis.


“I don’t get into political discussions at dinner often anymore, cause I want to embrace everyone no matter what. ‘Political’ for me is when I walk out of my house. If I can make an impact with my allies who share my views and/or pose questions to people, then that is maybe the best I can do politically. Love seems to be political to me these days, and has for many years. That loving somebody is so political, is such a heartbreaking truth.”

In 2007 she married trans man, performer T De Long (Chloe being legally a man and T a woman). She was rebuilding relationships with her family. Her visual art was becoming known, even internationally. In January 2011 she co-curated an exhibition of trans art, including some of her own drawings.

She was living at an HIV/AIDS residence and her prescription dosage had been raised after a brief hospitalization. She left around 2.00 am, wandered into a closed subway station and ended up underneath a service train. She was aged 50.

Here is one of her poems: