Olivier was raised in Belgium, his father a chemical engineer. He wanted to be a girl, and was tormented by the fact that girls get to be princesses and wear dresses.


"A girl in my class told me that, in America, you can have a sex change, so I read everything there was about it, and told my friends at school that I would have this done." 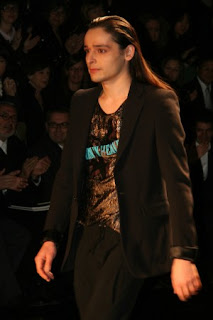 His parents encouraged him to draw and by the age of seven he declared that he wanted to be a fashion designer. He diverted his energy into drawing women and fashion.


"I was very attracted to all beautiful women — actresses, singers, but it was like a girl who loves these women, not a boy. I was always imagining what it is to be a beautiful girl."

By the age of 10, his shoulders began to widen, and he saw that he would never become the beautiful woman that he dreamed of.


"Because I am a perfectionist, it put me off the idea. So I quickly became Olivier. I am very happy to be a boy and I never think about that any more".

At 18 he studied fashion design at the École Nationale Superieure des Arts Visuels de la Cambre, but dropped out to start his own label. Madonna wore one his dresses to the 1998 Academy Awards. He went on to design for Rochas and Nina Ricci and Theory. Olivier says that he is happy to live in a age when androgyny is fashionable.


"I own a few things that I designed for women, but I like looking neither like a man nor a woman, more like a fantasy boy."