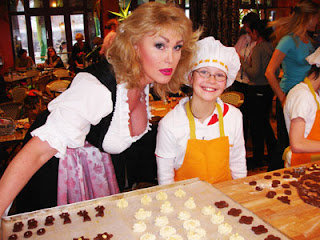 Gloria Gray is the stage name of a trans woman born in Zwiesel, Bavaria, child of a long-distance lorry driver and a restaurateur. She is a graduate of the Deutsche Schauspielakademie in Munich, and had surgery in 1992 with the support of her parents.

She became famous in 1993 in the television comedy Halli Galli. And then appeared in variety shows and moderated dinner shows working with celebrity chefs. She worked with Cliff Richard, Marianne Sägebrecht and Amanda Lear, and played Mae West in the film Marlene, 2000. The same year she performed at the German national final for the Eurovision Song Contest.

She has won several court cases for slander regarding her past, including one against a Munich newspaper that had claimed that she is a transvestite.

In 2004 and 2005 she was a presenter and singer on Spanish television for the gay pride broadcasts, and premiered her show, Lieder im Mieder, at Munich's 2006 Christopher Street festival.

In 2007 she was featured in the Magie der Vielfalt photography exhibition. 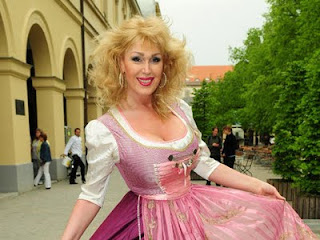 Her autobiography, Mit allem, was ich bin, (With Everything that I Am), was released in 2009.

In 2010 she opened a cafe named after herself in Zwiesel, and in 2011 attempted to run for the Green Party in the mayoral election there, but did not get enough signatures. In 2006 she announced her intention to marry her male lover of many years in a church wedding, but the Catholic Church refused, and it has not yet happened.


*Not the abortion activist in Alabama.