Fereydoon Molkara worked in television before transition. In 1978, before the Iranian Revolution, Fereydoon wrote to Ayatollah Ruhollah Khomeini, who was then in exile, requesting religious guidance. Khomeini replied that the case was different from homosexuality, and said that she should follow the Islamic obligations of being a woman. 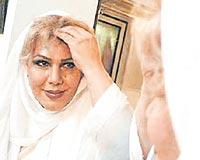 After the Revolution, Fereydoon, like all other transgender persons in Iran, was seriously harassed. She was made to wear men’s clothing, forced to take male hormones, and confined in a psychiatric hospital.
In 1983, she tried approaching Khomeini directly and was badly beaten up by his bodyguards before succeeding. However Khomeini did give Fereydoon a religious authorization for sex-change surgery. This has been taken to be a fatwa that covers other transgender persons as well.

Subsequently Maryam struggled to organize transgender persons in Iran, and introduce medical standards. However she was not happy with procedures in Iran, and had surgery in Thailand in 2001. She runs the major transsexual campaign group in Iran, and frequently has to bail out trans persons who have been arrested.
EN.Wikipedia.
Time: 06:21