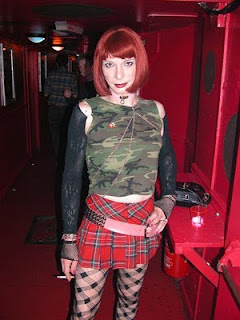 Alex started DJing in 1989 using the name DJ Lowenbandiger at free acid house parties. In 1991 he and others started London's first euro techno night at the Bar Industria. He also opened a record shop, Silverfish, at 146 Charing Cross Road which was open 24 hours a day – the first to do so. The shop became a collective of sculptors, musicians, scientists, film makers, poets and acted as an inspiration to the club scene of the 1990s.

Silverfish staged almost 300 techno electro parties, with Alex as the resident DJ at most of them. Alex Silverfish became a DJ brand name across Europe, but still played for free in underground techno parties.

With the new century, Alex embraced electroclash alongside techno, and also announced that she was changing to female. “After a life of agony, four years of therapy and two suicide attempts, I’ve finally started a sex reassignment program to correct a natural error that occurred at birth. Basically I’ve finally become one after a lifetime of living a double life.”

She received much support from trans persons in the club scene, and from techno friends, but frequently got a lot of hatred from Bengali gangs on the housing estates close to her flat in Bethnal Green. “Giving too much freedom to fascists of every faith always results in weaker groups and sections of society losing theirs and suffering,” she warned.

She committed suicide at age 43.

Long forgotten, Bethnal Green was the location for Bethnal Rouge, a drag commune associated with the Gay Liberation Front in the early 1970s.  This was long before the Bengalis came.  Bethnal Rouge also met hostility from some neighbours, but at least there were several queens to give each other support.