Latifa al-Khalifa was Sheika Latifa, and niece to Hamad bin Isa al-Khalifa of Bahrain who became Emir in 1999 and King in 2002. At 12 Latifa was sent to a girls’ boarding school in Gloucestershire, England. 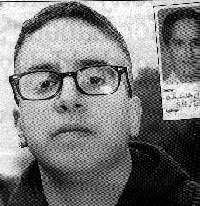 At 16, on return to Bahrain, she demanded to join the army, a normal step for princes, but unheard of for a princess. The king finally agreed, and Latifa was sent to Sandhurst for officer training – one of 90 women out of 400 soldiers. Later with the Bahraini army, she didn’t have the body strength to lift heavy weapons, and after a hip injury was medically discharged.

She became part of Bahrain’s underground gay scene, but as it is transphobic, she pretended to be a lesbian. She was picked up by the police’s discipline squad but they saw from her ID card that she was royalty.

As pressure to marry as a woman mounted she escaped during a family visit to London in 1999, and he became Taff. The family has tried to kidnap him. He has applied for asylum in the UK.