Richard Byron from Balmain was illegitimate and abused by his stepfather. He ran away to Sydney, became Carlotta and joined Les Girls drag cabaret show in Sydney in 1965. The show, which had started in 1963 in a building, at the corner of Darlinghurst Rd and Roslyn St, then owned by gangster Abe Saffron. It struggled until it was featured on Channel 9's Australian Project '65 which had a dressing room interview with the then unknown Carlotta (see video below).  The show went on to great success and became a must-see for visitors to Sydney.

Carlotta stayed with the show for 26 years, rising to become its compere and most famous star. Carlotta styled herself "Queen of the Cross” (Kings Cross, Sydney, NSW). 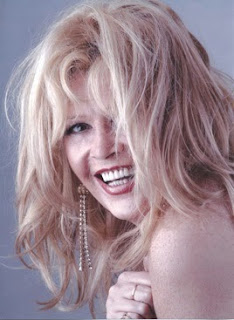 She first appeared (with Edna Everage) on film in the pioneering Australian sex documentary, The Naked Bunyip, 1970.

She was featured in six episodes of the soap opera, Number 96, in 1973 under the actor pseudonym of Carolle Lea playing a character who admits that she is transsexual - this is the first time that a transsexual was cast as a transsexual on television.

She had previously had breast implants from Dr Lee in Hong Kong, and completed transition in 1972 with surgery at the Prince of Wales Hospital in the Sydney suburb of Randwick , and had one of the first three sex-change operations in Australia. Carol Bryon, as she now was, was introduced to her first post-op boyfriend, a television journalist, by Germaine Greer.

She was one of the inspirations for the film Priscilla, Queen of the Desert. She retired from Les Girls in 1992, and published her first autobiography two years later. For several years has been a panellist on the TV show Beauty and the Beast. In 2003 she was featured on the television biography show, This is Your Life, and published a second, more explicit, autobiography. In recent years she has toured Australia with her own shows.

The Wikipedia page for Balmain does include Carlotta among its notable residents.

The Aussie Soap Archive says of Carlotta’s surgery: “She paid just $5 for the procedure - the figure was to cover the costs of the legal documents that Carlotta signed, waiving any right of recompense from the hospital should the operation go wrong. Carlotta happily went under the knife, the operation was a success, and she never regretted it.”

It is ironic that Carlotta, who pioneered  trans playing trans in 1973, is portrayed by a cis actor in the 2014 biography.