The son of a London banker, Newman was educated at Great Ealing School and Trinity College, Oxford. He became a Christian at 15, and an Anglican priest at 24. He was a leader in the Anglo-Catholic Oxford Movement, converted to Catholicism in 1845, and was created a Cardinal in 1879.

Officially he was celibate all his life. However he had intense friendships with younger men, first with Richard Froude who died aged 33 in 1836, and then he lived with Ambrose St John from 1843, when St John was 28, until St John's death in 1875. 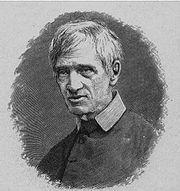 Newman was not the most masculine of men. John Campbell Shairp described Newman as a woman’s soul in man's body. Lytton Strachey described his "soft spectacled Oxford manner, with its half-effeminate diffidence". Another contemporary described him:


“Robust and ruddy sons of the Church looked on him with condescending pity as a poor fellow whose excessive sympathy, restless energy, and general unfitness for this practical world would soon wreck him. Thin, pale, and with large lustrous eyes ever piercing through this veil of men and things, he hardly seemed made for this world”.


“Early in the evening a singularly graceful figure in cap and gown glided into the room. The slight form and gracious address might have belonged either to a youthful ascetic of the middle ages or to a graceful high-bred lady of our own days.”

Wilfred G. Ward, another English convert to Catholicism reported a dream that had had a strong impact on him:


“He found himself at a dinner party next to a veiled lady, who charmed him more and more as they talked. At last he exclaimed, ‘I have never felt such charm in any conversation since I used to talk with John Henry Newman, at Oxford’. ‘I am John Henry Newman’, the lady replied, and raising her veil showed the well-known face."

In his later years a similar impression remained. One colleague described him as 'white, frail and wistful', and another as 'delicate as an old lady, washed in milk'.

His major writings were his autobiography, Apologia Pro Vita Sua, 1866 and Grammar of Assent, 1870. His poem Gerontius was later put to music by Edward Elgar.

He died in 1890 and in accordance with his wishes was buried in the grave of Ambrose St John. A joint memorial stone was erected: Ex umbris et imaginibus in veritatem ("Out of shadows and phantasms into the truth").

The argument for St John and Newman being a gay couple is as strong as that for Hoover and Tolson minus the evidence of Susan Rosentiel re the drag parties. As Peter Tatchell said:  "It is uncertain whether their relationship involved sex. It is quite likely that both men had a gay orientation but chose to abstain from sexual relations. But abstinence does not alter a person's sexual orientation."

Newman certainly seems to have been more anima muliebris virili corpore inclusa than Karl Ulrichs was.


Which of the ancient gods of England, Lugh perhaps or Yngvi, arranged it that his body was fully decomposed before the Catholics came looking for relics?