Lucia Bartolozzi was born in London to an Italian art-dealer and violinist father and a German pianist and piano-teacher mother.

At the age of sixteen she briefly married Armand Vestris, a French dancer, ballet-master and rake. In 1815 Armand launched her career with a private show at the King's theatre in the Haymarket. 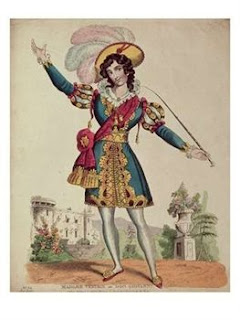 Lucia Vestris played many breeches parts such as Don Giovanni and MacHeath. In 1830 James Planche began working with her in burlesques, which were similar to pantomimes, but included daring and extravagant sets.

In 1838 she married Charles Mathews. They took over the management of Covent Garden Theatre and put on the first known version of Love’s Labour Lost since 1605, with herself as Rosaline. In 1840 she starred in the first relatively uncut A Midsummer Night’s Dream casting herself as Oberon, which started a tradition of female Oberons that lasted for 70 years. Her legs became very famous, and plaster casts of them were sold. There is even a song about such casts being stolen. She was still playing Breeches Parts when she was fifty.