Mary Walker was born and raised in Oswego, New York, the youngest of five daughters. In the early 1850s she adopted the new pants outfit associated with the name of Amelia Bloomer. She became one of the very first women doctors in the US when she graduated from Syracuse Medical College in 1855, the only woman in her class. She married in 1856, wearing men’s cloths, and she did not take her husband’s name. They set up a joint practice in Rome, New York, but separated in 1859.

With the start of the US Civil War in 1861, she volunteered on the Union side, but was only allowed to be a nurse, but after working as an unpaid field surgeon near the front lines, she became the second ever US Army Surgeon in 1863. In 1864, while treating civilians, she was captured by Confederate troops and charged as a spy. She was released as part of a prisoner exchange. In 1865 she was awarded a Congressional Medal of Honor, the only women to ever receive one. 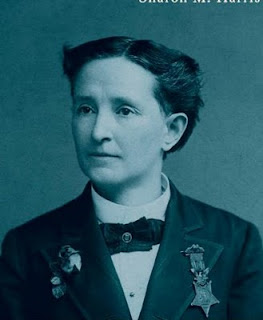 She was an advocate for women’s dress reform and in 1866 was elected president of the National Dress Reform Association, and made speaking tour of England. In 1869 she finally obtained her divorce. She became a persistent wearer of trousers, switching from an androgynous mix to strictly male clothing later, although at all times insisting on being treated as a lady, and she never attempted to pass as male. She stood by the earlier suffrage position that the US Constitution gave women the vote, and she opposed the majority of suffragists who switched tactics to campaign for a female suffrage law.

In 1887 she began the first of several mid-western tours in dime-museum sideshows. She built up a collection of over 1000 pictures and letter of cross-dressing individuals. She corresponded for many years with the German transvestite Otto Spengler.

In 1902 a medical journal article referred to “Dr. M- W--, of Washington" as “the most distinguished sexual invert in the United States".

In 1917 the US Congress revoked her Medal of Honor (along with 900 others) as she had not been in ‘actual combat with an enemy’, but she refused to return it and continued to wear it until her death. She died of old age at 86, and was buried in her black suit.

The FTM page implies that she was a trans man, but limited by the technology of the time.  I don’t see this.  While she liked men’s clothing, there is no implication that she wanted to be a man.  Unlike many female-born persons in the 19th century she did not attempt to pass as male.  Had she done so, she would have been able to vote.
Time: 07:09