Wallace Beery was born in Kansas City, Missouri. He joined the Ringling Brothers circus at age 16 as an assistant elephant trainer. He left after being clawed by a leopard. 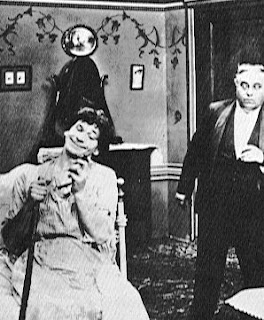 He made his name as an actor doing female impersonation first on the New York stage and then in one-reel comedies in the silent era, in 30 of which he appeared as Swedish maid called Sweedie.

In the thirties he was described as as having a 'pug-ugly face, ungainly 250-pound wrestler's physique and crinkly, boyish grin [which] fascinated audiences', starred in several MGM films of that time, including The Secret Six, Grand Hotel and The Champ (for which he received an Oscar in 1932).

Louis Mayer of MGM had a soft spot for the reckless pilot who often crashed his plane in deserts and on mountains, but who flew though a stormy weather and a forced landing in St Louis to be at the bedside of dying mother in New York.

Beery remained a drag queen who would put on an evening dress and a feathered hat at the slightest provocation.

As an actor he ignored the dialogue he was given, ill-treated his co-stars, and improvised everything to the despair of the director. He was brutal with women: he bloodily raped his first wife, Gloria Swanson, on their wedding night, and without her consent got her to drink an abortificant when she was pregnant.  He was equally bad to his second wife, Rita Gilman.

In 1937 Ted Healy, a founder of the Three Stooges, was beaten to death. One account is that the beating was inflicted by Beery, Albert Broccoli (the future producer of the James Bond films) and Pat DiCicco (gangster and Broccoli’s cousin). MGM sent Beery to Europe for several months and put out a story that three students had done the beating.

Beery acted in over 230 films. One account says that he died of a heart attack on the Queen Mary at age 64. The ship owners took his body to New York and put it in a hotel to avoid bad publicity. Other accounts say that he died at home in Beverly Hills.