Maryani was raised as a Catholic boy in Yogyakarta, Java. She grew up up be waria*, and for many years was a sex worker and drank alcohol. 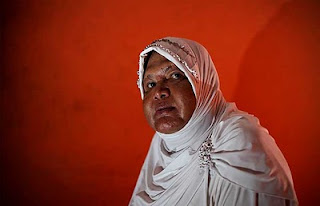 She then converted to Islam. She has since adopted an eight-year old girl, and in 2008 turned her house into Indonesia’s first Islamic school specifically for waria. As mosques are gender segregated, there is no place for waria to pray. Twice a week a group of about 20 waria, many tired because of their night-time employment, come to study the Koran and pray. They also study baking and beauty therapy to provide employment opportunities other than sex work.

Maryani says: “I'm thankful to God I've been given this fate, that I live like this".

In 2013 she made the umrahm, the minor haj pilgrimage.

She died at age 53, which resulted in the temporary closing of her school, but it reopened a few weeks later.
*= wanita (woman) + pria (man)