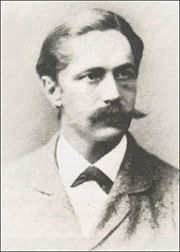 Daniel Paul was the son of a physician, Daniel Moritz Schreber, who had published pamphlets about taming rebellious children and imposed orthopaedic devices on his own children. Daniel Paul Schreber’s elder brother, Daniel Gustav Schreber committed suicide in his 30s.

Daniel Paul Schreber became Presiding Judge of the Saxon High Court of Appeals. In 1893 at the age of 42, having just been appointed the Senatspräsident of the Superior Court in Dresden, he became convinced that he was being transformed into a woman, and that he was to be the wife of God. He was diagnosed as having dementia praecox and entered a Leipzig psychiatric clinic and stayed there until the new century. After release he published his memoirs of the experience in 1903.

Sigmund Freud wrote an analysis based on Schreber’s memoirs but without ever meeting him. His diagnosis was paranoid dementia, based on repressed homosexual feelings for his physician.

Gilles Deleuze and Félix Guattari interpreted Schreber’s experiences in terms of the experience of power in late capitalism.

Jacques Lacan said that Schreber was incapable of being the phallus that the mother lacks and that he was left with the solution of being the woman that men lack.

Richard Ekins, deviating from his declared adherence to grounded theory, uses Schreber as his one example of a solitary ‘male femaler’ who living before the terms transsexuality or even transvestity had been developed, must construct concepts from his own life experience.

As we have seen with Charles Lowman, Frederick Taylor and Robert Baden-Powell, pillars of society are quite often secretive or even public cross-dressers. However such persons do not normally have mental breakdowns.

I would like to repeat the paragraph on Schreber that I wrote in my review of Richard Ekins’ Male Femaling:


Under Constituting he needs examples of femalers who have ignored or have no access to common terms like 'transvestite' or 'transsexual' and invent their own terms. Despite the many persons he spoke to over the 17 years he has no example of such a person that he has met, and falls back on the Daniel Schreber case made famous by Sigmund Freud and discussed in countless books. This example is unnerving in that it is the only example in the book of a schizophrenic trans person. He should either have discussed schizophrenics elsewhere in the book or have not mentioned this one. Schizophrenic trans-ness is a topic of great interest, but it belongs in a different book. To bring it in just to fill one slot in his schema is not reasonable.

As many of us know, if you are schizophrenic or have dissociative identity disorder (multiple personality) as well as transsexual, what the shrinks call ‘co-morbidity’, you are very unlikely to be approved by the gatekeepers. This is an area which needs more attention, but I have not found a suitable book or blog on the topic.

As we can see in the sample of theorizing that I give above, many theorists from very different schools have used Schreber and his memoirs to pursue their own agendas. All of which make it the more difficult to understand Schreber as a person. And - an important point - their theories turn Schreber into any else but a transgender person.

Note that the de.wikipedia article does not even mention the trans aspect of Schreber.
Time: 17:05