Marion’s parents in rural Pennsylvania, wanting a girl, announced their baby to be so, and then were embarrassed to switch the child to boys clothing. They had named the child Marion as it is fitting to both sexes. 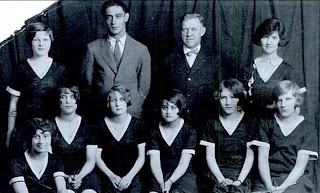 Marion’s ‘boyish’ ability in sports led the neighbors to suspect that she might not be a girl. They explained the situation to Marion at age 9. He threw a tantrum and wept, but his parents persuaded him to continue. They considered moving to another place where Marion could start over as a boy, but Mr Bodmer had acquired considerable property and become Chief Burgess.

Marion continued through high school as a girl, as a good student and for three years was on the girls’ basketball team, however the other girls considered that she played like a boy and her nickname was Gus.

At age 19 Marion switched to male clothing with the intention of entering the legal profession, and to that end registered at a preparatory school in Allentown for the summer, and Dickenson law School in the fall.

This story, which resembles fantasies found in transvestite fiction, was actually reported in the US national press at the time.

Thank you to Kathy Padilla for the photograph and the obituary of Marion's wife.

Marion is on the right in the front row in the photograph.
Time: 08:15