Portatadino was born in Buenos Aires. He studied engineering, specializing in petroleum refining, and became a manager with Chevron. He had been consulting a psychiatrist who had diagnosed multi-personality syndrome. The diagnosis was changed to gender dysphoria, and he started hormones. 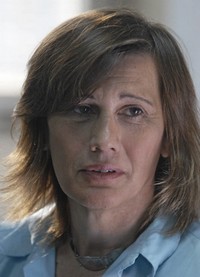 A few months later, while on a work assignment in Chile she changed her appearance and became Alejandra. This was okay with her boss. She was considering having surgery in Chile which was more advanced in services for trans persons, but the Homosexual Community of Argentina (CHA) encouraged her to do it in Argentina to set a precedent. In 2001, Chevron acquired Texaco and Portatadino was transferred to Texaco, where she had to dress in a suit and tie. She was demoted and then fired.

Alejandra educated herself on the law and anthropology and applied for legal recognition. She applied to obtain legal recognition as a woman, and for the right to have gender surgery. The judge required an evaluation from government medical investigators, and they agreed with Portatadino’s request. The judge then dismissed the case as outside his jurisdiction. She applied to the Supreme Court and the expert opinion already obtained was accepted. She was able to use this but still had to file many motions in lower courts. She gave a paper at the first Argentine conference on gender dysphoria in 2005. She was finally legally recognized in 2006, and had surgery the same year.

Since then she has worked with the law division of CHA on rights for all GLBTTI persons. In particular she was able to arrange free hormone supervision in a state hospital, and to establish the standards of care for transsexuals in Argentina. She has a grant from the World Health Organization to do outreach work for sex workers with Aids.

In 2008 on International Women’s Day, Alejandra was recognized by the Buenos Aires Legislature as one of 20 Argentinean women who ‘broke traditional moulds’.

Sonia John adds a translators note to her translation:


"The label "travesti," with its connotation of sex work, is very highly stigmatized throughout Latin America.  In addition, the general Latin American public often does not make a distinction between "travesti" and "transexual," and so some trans women there are working to change public attitudes by avoiding the latter term, referring to the Harry Benjamin Syndrome instead."

Charlotte Goiar likes to claim Alejandra's work in Argentina as an HBS success, but note that she works with the CHA and uses the umbrella term acronym GLBTTI, both of which are anathema to most HBS persons in Europe and North America.