Antonio Iacono was born in Tunisia. 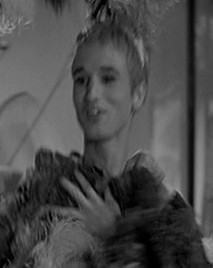 He did drag shows from an early age. He studied in Paris at the Comedie Francaise, and paid for his studies by performing as Dominot at Madame Arthur, and at Le Carrousel. He then lived and performed in Teheran. Then in Rome he was openly gay, worked with Vinicio Diamanti and Gio Stajano.

Dominot was in Fellini’s La Dolce Vita 1960, for which Antonio Jacono and Domino are listed in IMDB and elsewhere as two persons, thus turning the 2 transies into three.

In 1960s he worked in avant-garde theatre. From 1984, he ran a bar in Rome, Il baronato quattro bellezze, where he performs in drag singing the French chanteuses from Edith Piaf to Juliette Greco.
IT.WIKIPEDIA