Astolfo Barroso Pinto was born in Cantahalo, outside Rio de Janeiro. As a teenager, she watched the grand entrance of the travestis during the Carnaval drag balls. She started as a low-paid makeup artist at a local television station and a few years later she was Rogéria, Queen of Rio’s Carnival, and was invited to join a drag show. 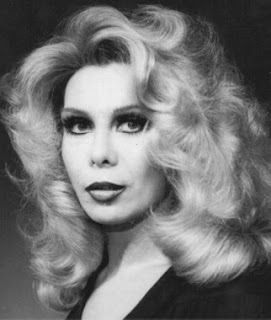 She toured Brazil as part of Les Girls, was featured, singing in her own voice, in nightclubs and gay bars. She went to Luanda, Angola for a year in 1971, and then to Barcelona, where she stayed with Coccinelle, whom she had first met in Rio. Coccinelle recommended her and she performed at Le Carrousel in Paris. When she returned to Rio in 1973, she was an international star.

Her mother was convinced that she had a daughter when they took the ferry across the bay and she saw how men looked at Rogéria.

In the 1970s Rogéria spoke up for gay liberation when interviewed by the countercultural magazine  O Pasquim.

In 1992 she was a special host at the Sambadrome, one of the big events of Carnaval. She has been in ten movies, and worked often on television. Her web site proclaims her to be “Maior icone gay de Brasil”.
PT.Wikipedia    www.estrelarogeria.com.