Rhodri Davies was raised in a house on Wimbledon Common. His father was a fighter pilot in the Great War, and reservist who died in the Second World War. His mother died in an air accident over Frankfurt in 1952.

He had sexual experiences at his boys' public school, where he gained respect by becoming the captain of the cricket XI.

After school he went to Africa to work on the family’s cattle farm, where he was also a big game hunter. 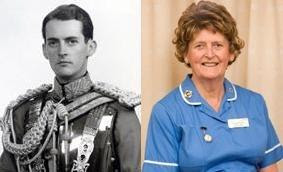 He did National service in the Life Guards, part of the Household Cavalry, and stayed for ten years rising to the rank of captain and serving in Egypt and Aden, where he was almost killed when his vehicle was blown up. He escorted the Queen, was in the guards at Whitehall, and played polo.

He then took over the family farm in Leicestershire. He met his wife, June, on a course for riding instructors. They had two sons.

After 30 years of marriage they divorced and his oldest son took over the farm. In 1994 Rhodri decided that it was time to become Miranda Ponsonby (Ponsonby being her mother's maiden name). She couldn’t be bothered with a real life test:


“I said bugger that to all that messing about. I saw this chap, a cosmetic surgeon, at a clinic in Huntingdon. I don't think he's practising any more. I asked him how much to skip all that bloody nonsense. He said £6,000. About a week later, I went up to some dreadful place called Rotherham. I hadn't ever dressed as a woman before. So I bought some women's clothes, put them in a suitcase, and drove up on a rainy, awful day. It was a horrifying operation. They managed to leave part of one of my testicles behind. Which was a bit careless. After a day, I decided to go home."

Miranda trained as a nurse at Guys Hospital, and is the oldest nurse ever to qualify in the National Health Service. She has now worked at the Kettering General Hospital for 10 years, and is currently in the coronary care unit.

She is quite open about her past. Her family, her regiment and the hunting set all cut her off. She claims that she is no happier now than she was before the operation. Her advice to those contemplating sex change surgery is "I would say don't do it. I am a very strong person and if you are not you will be destroyed by it”.

She published her autobiography in 2009.