Wilhemena Smith was born in Sydney, NSW, to English immigrants. Her mother died, her father went back to England, and she was raised in an orphanage. Bill transitioned early to male. He worked as a seaman, and jumped ship in Cairns, Queensland. He worked as a miner and almost twenty years at the brewery in Cairns.

He is best known as a jockey in north Queensland horse racing. He held a joint trainer and jockey licence. He was a loner who arrived already wearing his colours under his street clothes. He never showered at the track, and didn’t speak much to the other jockeys. They referred to him as ‘Girlie’ – a mix of a homophobic putdown because of his shyness, and a suspicion that he might be a woman. Bill both trained and rode winners into the 1950s.

When he retired he rented a one-room flat in a tiny hamlet, Innot Hot Springs, 150 km from Cairns. In declining health at age 88, he was taken to hospital at Herberton 80 km away. He was being admitted into the male ward when a doctor who had treated him before, spoke to the nurse and he was put into the female ward instead even though his pension card said male. He never recovered. The nurses tried to find who he was, and it was subsequently recorded that he was ‘female’. No living relatives were ever found. One nurse painted his portrait. 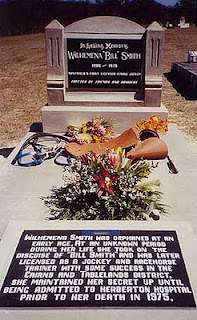 In 2000 The Australian Racing Museum held an exhibition of women in racing (which was not officially allowed until 1979) and highlighted Bill’s contribution.

In 2005 Bill was chosen for the Women’s History Month postcards using an image of W.H. Smith. Phil Purser’s work at the same time led to more research and the separation of W.H. Smith and Bill Smith.

After Phil Purser’s articles, almost $3,000 was raised for a gravestone in Herberton in the name of ‘Wilhemena Smith’. Phil Purser won the Queensland Racing 2005 award for the Best Print Story.

As with James Barry,  Alan Hart and Billy Tipton, a trans man is turned into a female hero.  If he were a woman in disguise to be a jockey, he would not have continued as male after retirement.

FTM Australia has an article on Alan Hart, but nothing at all on Bill Smith.
Time: 20:00