Joseph Doucé was raised Catholic in Sint-Truiden, in Flemish Belgium. During his military service he chose to serve in a Francophone regiment. 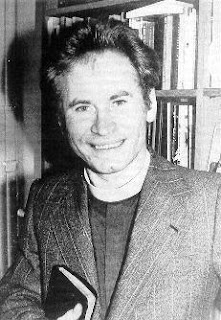 After a year of pastoral studies at the Catholic Europaseminär at Stenonius College, he converted to the Baptist faith. After studies in Switzerland, he became a pastor and served parishes in Lens, Belgium and Bethune, over the border in France,  from 1970-4. Aware of his own homosexuality he studied pastoral and psychological needs of sexual minorities at the Free University in Amsterdam 1974-6, partially supported by a grant from the World Council of Churches.

He became a French citizen in 1982. He was a founding member of the International Gay Association (IGA later ILGA), a member of HBIGDA (now WPATH), active in Forum des Groupes Chrétiens Gais d’Europe and was one of the first in France to educate about the new AIDS disease. In 1986 he self-published La Question transsexuelle with an Introduction by Louis Gooren (soon to be Professor of Transsexology at the Free University in Amsterdam). He also published on pedophilia and sadomasochism and gay couples.

There was a dinner-meeting for transsexuals the first Tuesday of every month, and a helpline every Monday evening. One of the more than 500 transsexuals who came through CCL was Tom Reucher (who later founded l’Association du Syndrome de Benjamin and l’ExisTrans).

In the late 1980s Doucé and his lover, Guy Bondar, opened a bookshop, Autres Cultures, in central Paris. He became a member of the Commission des liberté au Sénat, and in September 1989 he was able to get the European Parliament to pass a Resolution condemning discrimination against transsexuals, and later the same month Recommendation 1117 to the Council of Europe to call on member states to permit legal changes of gender and first names for transsexuals.

On 19 July 1990, two men showed police badges and asked him to go with them. In late October his decomposed body was found in the forest of Rambouillet outside Paris. It is claimed that he was taken by the political police, Renseignements Généraux (RG). RG section leader Jean-Marc Dufourg was questioned about Douce’s death, fired and convicted of misuse of a firearm, but never officially admitted to be Doucé’s murderer.
FR.Wikipedia       EN.Wikipedia.
Time: 07:47