Molinier, the son of a house painter, lived most of his life in Bordeaux, France.

As early as sixteen his sisters took him to a ball dressed as a girl. At age 18, when his sister died, he allegedly had sex with her corpse when left alone to photograph it.

Many of his paintings 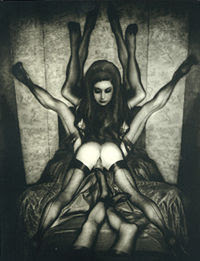 In 1967 he met Hanel Koeck, a German sadomasochist who was a leg and shoe fetishist. She became the model in many of his paintings and photomontages. Jean-Pierre Bouyxou made a film Satan bouche un coin, 1968 which included Molinier in drag. In 1975 he photographed the Swiss painter Luciano Castelli in drag. The next year he photographed Thierry Agullo, a Bordeau painter, also in drag.