Méi Lán (male name) was born into a family of Beijing Opera performers. He made his 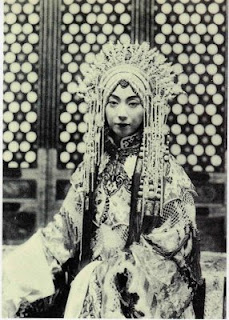 debut at age 10 at the Guanghe Theatre.


He acted for 50 years and almost exclusively played the qingyi role, a type of the dan role, that is he played female parts. He is generally known as Méi Lánfāng (a female name). His style became renowned as the ‘Mei school’.

He was the first Beijing opera star to tour abroad and took his art to Japan and the United States. He was welcomed to Hollywood by Charlie Chaplin, Douglas Fairbanks and Mary Pickford. In the Soviet Union he was filmed by Sergei Eisenstein.

With the Japanese invasion in 1937, Méi moved to Hong Kong. He later returned to Shanghai, but grew a beard and moustache and refused to perform until 1946. In 1948 he appeared in Sheng si hen, China's first colour film.

After the Communist takeover he was director of China Beijing Opera Theatre and the Chinese Opera Research Institute, and was elected a deputy to the National People’s Congress.

He died of a heart attack.

Méi is the subject of a star-studded new biographical film by Mei-Juin Chen.