Ilya Pearlman has been acting since she was 10-years-old.

She played male characters all over the US, from Nathan Detroit in Guys and Dolls with the Provincetown Players to all the male roles in Medea, Macbeth and A Comedy of Errors with Dan Savage-led theatre company Greek Active in Seattle. She also played the matron in Women Behind Bars. In New York Pearlman was a member of WOW Theater, playing the memorable role of Sandy Sonnenshein, the dyke Card Sharp in Lynn Hayes' Guitar Boy. 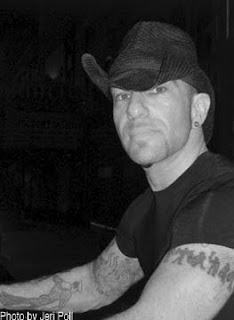 She was one of the Jew Girls in the jazz- performance-art-comedy group Sister Theresa and the All Jew Girl Band. As a lead singer and bass player she fronted such bands as the reggae/ska Small Axe, wave/punk bands Skinny Wires and Jezebel's Kiss.

In 1994 she created and directed an all-girl Romeo and Juliet, set in the modern day Seattle snakepit of rival women's softball teams.

She adapted and directed an oddly gendered and award-winning version of the Douglas Sirk/Ross Hunter/Lana Turner movie Madame X; and a surrealist The Wonderful, Horrible Life of Lawrence Welk; and a series of fantasy/nightmare performances for the fetish balls of Seattle.

As most of you know, a film biography of James Barry the 19th century trans man doctor is currently being made. Why have they cast a cisgendered woman in the part when a trans man with as much acting experience as Lazlo is available? I suspect very much that the film will deny that Barry was a trans man, and will pretend that he was a woman in disguise.
Time: 23:17