Lothar Berfelde was born in Berlin-Mahlsdorf. When a young boy, his grand-uncle said that Lothar should have been a girl living at the previous turn of the century, while a transvestite lesbian aunt allowed young Lothar to roam around her Prussian farmhouse in girl's attire.

During the Second World War he helped a second-hand dealer clear out apartments of deported Jews, and sometimes kept items for himself.

His father was the local Nazi leader, and in 1942 Lothar had to join the Hitler Youth. When his parents split in 1944, the father pulled a gun on his son. Lothar killed him with a rolling pin while he slept. After several week in a psychiatric institution, he was sentenced to four years in a juvenile prison, but was released with the fall of the Nazi regime.

In the new German Democratic Republic, he worked as a second-hand dealer, and often dressed as female, and became known as Charlotte von Mahlsdorf. She collected from the bombed-out houses, and also from homes abandoned by those who fled to West Berlin.

Her collection evolved into the Gründerzeit Museum. She became involved in the preservation of the Mahlsdorf estate in 1958 , and later was awarded the manor house, rent free. From 1974-6 the state tried to bring the museum and its exhibits under state control. Charlotte fought this by giving away the exhibits to visitors, and perhaps by becoming a Statsi informer, but was allowed to keep the museum.

After the union of the two Germanies, her museum was attacked in 1992 by neo-Nazi 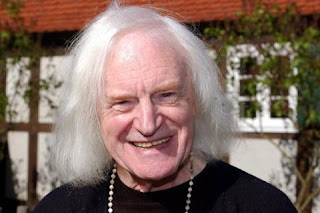 s, and several people were hurt. This was the same year that Rosa von Praunheim made a film about her life. In 1993 she was awarded a Bundesverdienst-kreuz medal.

In 1997 she moved to Sweden and set up a similar museum in Porla Brunn. The City of Berlin bought the Gründerzeit Museum.

She died of heart failure while on a visit to Berlin. A memorial has been erected to her, but at the insistence of her relatives, it is dedicated to ‘Lothar Berfelde’ and uses male declensions.

The German word 'frau' can be translated into English as either 'woman' or 'wife'.

In Nazi Germany the sentence for a teenager killing his own father was only four years. That is a surprise.

Of course the real achievement is an out trans person being able to run her own museum in East Germany. I cannot think of any equivalent achievement by a trans person in the Nato countries before 1990.
Time: 12:41