Ella Wesner started in showbiz as a ballet girl. She was Annie Hindle's dresser for a 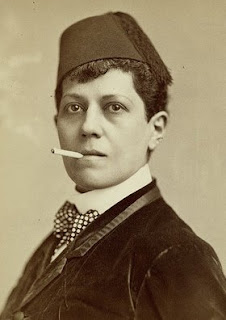 while which enabled her to learn the tricks of male impersonation.

She was very popular in the 1880s. Like Hindle she recycled British Music Hall material for American audiences. Her best remembered act was as a tipsy dude getting a shave. Some found her act rather coarse or dubious, but this contributed to its masculinity.

She never married and seems to have preferred female lovers. Her only reported romance was with Josie Mansfield, the notorious mistress of crooked financier Jim Fisk. After Fisk was shot by another of Josie's lovers, Edward Stokes, Ella and Josie went to Paris and presided over a salon at the Café Américan.

Ella asked to be buried in her male costume.