Greg Lankton was the third child of a 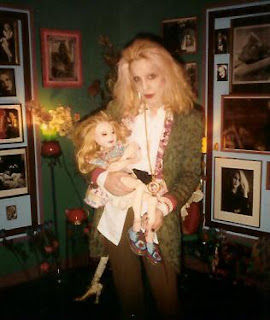 Presbyterian minister in Flint, Michigan. As a child, Greg made dolls, played dress-up and was like other girls. He was also raped by his grandfather.

His family preferred a daughter to a gay son, and proposed a sex change. Greer was rejected by several sex-change doctors, but his mother found a surgeon who would do it. It was paid for with financial help from the father’s church congregation. However within a year Greer regretted the surgery and attempted suicide, although after recovery she did continue as female.

In 1987 she married her long-time boyfriend, Paul Monroe, also an artist, with her father as the minister, and Teri Toye as the bridesmaid. She and Paul experimented with drugs. She was a successful New York artist making dolls, sculptures and drawings. She worked with Jim Henson of Sesame Street. She was featured in the Whitney Biennial and the Venice Biennial of 1995. 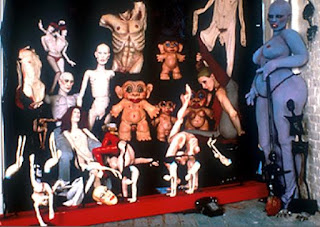 Her last showing was in “It’s all about ME, Not You” at the Andy Warhol Mattress Factory in Pittsburgh. Among her works is a sad-faced bust of Candy Darling; a sculpture of a toddler-hermaphrodite giving birth to twins, and an emaciated near-life-sized Sissy Boy.

She was raped during the preparation for the Pittsburgh show, and died of a drug overdose shortly afterwards.