Bev Francis was born in Geelong, Victoria, and did a degree at the University of Melbourne in physical education. In 1977 she broke the Australian shot-put record.

She became a world champion power lifter each year from 1980-5, breaking more than 40 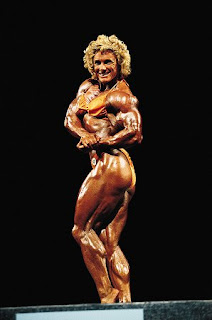 She then became a body builder, and has taken body building much farther than other female body builders do. In doing this she has demolished many of the assumptions about what defines a woman. Her strength and her body size are such that she looks much like a man and is often accused of being either a man or a transsexual.

She was featured in the 1985 film Pumping Iron II: The Women where she was persuaded to enter a female body building contest in Las Vegas specially created and paid for by the film makers. She came in eighth despite obviously having the best developed muscles, because she was scored low on the criterion of 'femininity'.

A similar situation happened at her final competition: Ms Olympia, 1991 where she was declared to be second.

She met her husband on the set of Pumping Iron II, and they now have two daughters and run a gym in Long Island, New York.

There is no suggestion that Bev is male, transgender, intersex, nor that she took male hormones. Given her achievements in developing her body and lifting weights, I see no reason to be suspicious of Tamara Press a generation earlier.
Time: 14:47