Milligan was educated at Bradfield College in Berkshire and Oxford University. He was president of the Oxford Union. 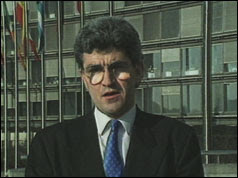 He worked as a journalist for The Economist, the BBC and then The Sunday Times.

He was the Conservative Member of Parliament for Eastleigh in Hampshire from 1992, and had been appointed a parliamentary private secretary to the Minister of State for Defence. He was also a parliamentary advisor re the then proposed privatization of British Rail.

Stephen Milligan was found dead in February 1994 dressed in stockings and suspender belt with a plastic bag around his head and an electric cord around his neck. A case of transvestic auto-erotic asphyxiation.

Mac Mathúna, Heathcote and Harris suggest that Sado-masochistic sex was more typical of Milligan's boss, Jonathan Aitken, the then Minister of State for Defence, and that there was no indication that Milligan had previously been interested in such activities. There is also a suggestion of a political assassination. If that were so, then he does not belong on these pages, but their theory is also unproved.
Time: 10:51