Ellen Tremaye arrived in Melbourne, Australia from Waterford, Ireland in 1856, where she had borne a child, possibly illegitimately. Her birth name may have been Ellen Lacey. She travelled with a trunk full of men’s clothing, and only minimal female clothing. She made passes at women, and some thoug 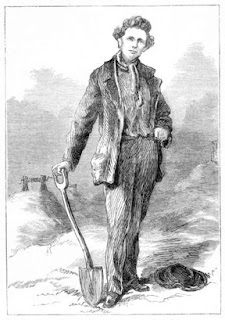 ht that she was a man travelling as a woman.

After a year as a maidservant, Evans began living as male.

Edward de Lacy Evens soon married Mary Delahunty who had come on the same ship. Delahunty left him after a few years, and when she remarried in 1862 she explained that it was not bigamy in that her first husband had been a woman.

Evans also remarried in 1862 to a young Irishwoman, Sarah Moore. They stayed together until her death of pulmonary tuberculosis in 1867.

The next year, Evans married again, to a 25-year-old dressmaker assistant, Julia Marquand. Evans worked as a carter, miner, blacksmith and ploughman. In 1877 they 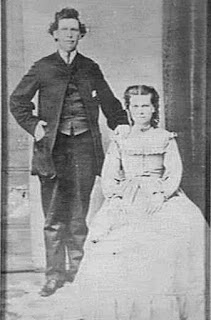 had a daughter, following visits to Julia by her sister’s husband.

In 1879 Evans had a breakdown and in Kew Lunatic Asylum (later the Willsmere Hospital) was discovered to have a female body. His wife told the press that she was unaware that he was not a man, but he had never undressed in front of her. Julia stayed in the same town as a single mother. Her paternity suite against her brother-in-law failed. She did not remarry and lived to the age of 71.

Evans made a meagre living as a ‘man-woman’ exhibit in side shows for a few months, and then appealed for readmission to the asylum. He was taken as an inmate at the Immigrants Home in Melbourne but was compelled to dress as a woman. He lived as Mrs de Lacy Evans in the home for 21 years, refusing to speak of his former life.

He died of influenza at the age of 61.