After starting in Music Hall as a comedian, he met the thirteen-year-old Kitty McShane (1897 – 1964) while playing 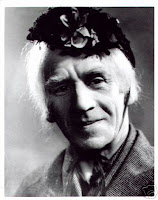 He took the dame act that he had already done and developed it into a mother-and-daughter act: 'Old Mother Riley and her daughter Kitty'. At the same time he changed his professional name to Arthur Lucan.

Daphne Snowdrop Bluebell Riley, was an Irishwoman from Liverpool, willing to use her fists when necessary, who always wins out against the crooks and German spies she is pitted against.

Lucan always stayed in character and did not remove his wig at the end. Off-stage he was rarely recognized and it was Kitty in the limelight. After twenty years of playing the act they appeared in the Royal Variety Performance at the London Palladium in 1934, and performed the sketch 'Bridget's Night Out' which became a classic.

Between 1936 and 1952 they made more than a dozen films, the last one of which, Old Mother Riley Meets the Vam 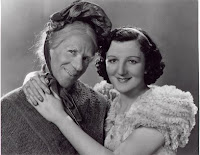 pire, co-starred Bela Lugosi. All were cheaply made, and until 1949 none were played in the West End of London. By 1941 Arthur Lucan was named as second only to George Formby as Britain's top film star.

Kitty’s extravagance led to bankruptcy, and because of her affair with a younger actor, they separated in 1951 and toured in separate ‘Old Mother Riley’ productions. In Kitty's last film, Old Mother Riley's Jungle Treasure, her scenes were filmed on separate days.

Arthur collapsed and died in 1954 while waiting to go on stage at the Tivoli in Hull, and his understudy, Roy Rolland, had to step in. As he left taxes owing, Kitty continued the act with Rolland, until she herself died in 1964.

In 1983, Alan Plater wrote a play, On Your Way, Riley, about the life of Arthur Lucan, with songs by Alex Glasgow.

Here is a clip from Old Mother Riley Meets the Vampire. Fans of British comedy should note the two women in the background. One is Hattie Jacques who would later appear in Hancock's Half Hour in the 1950s, in many Carry On films in the 1960s, and with Eric Sykes. The other is Dandy Nichols who would play Elsie Garnett in Till Death Us Do Part in the 1960s and was also in the the Beatles' Help..