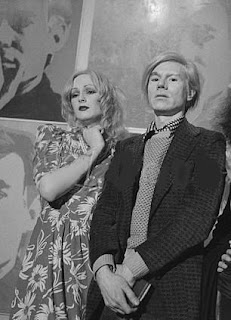 n Massapequa Park, Long Island, New York by his divorced mother, who worked as a bookkeeper at Manhattan’s Jockey Club, and later at the local telephone company.

He won a ‘Most Beautiful Baby’ contest - but, because of a mistake by his mother, as a girl. For a while he ran a Kim Novak Fan Club. When he was 17, his mother confronted him with the rumors that he had been seen in a local gay bar in drag. He left the room and returned en femme.

Her first drag name was Hope Slattery, and then Hope Dahl, Candy Dahl, Candy Cane. By the age of twenty, James had become Candy Darling and moved to Greenwich Village. Through Jackie Curtis, (then 15) who wrote a part for her in Glamour, Glory and Gold, she was introduced to Andy Warhol, and she and Jackie had a small roles in Flesh, 1968, babbling on about glamour advertisements and other such topics while Joe Dallesandro is being blown by an old girl friend.

With Jackie and Holly Woodlawn, she also appeared in Paul Morrissey/Andy Warhol’s Women in Revolt, 1972 – sometimes referred to as Blonde on a Bum Trip, in reference to Candy’s character.

She was immortalized by the Rolling Stones in “Citadel” on Their Satanic Majesties Request: “Candy and Taffy, hope we both are well/Please come see me in the citadel”, and in two Lou Reed songs, Candy Says: “Candy says I've come to hate my body/ and all that it requires in this world”; and Walk on the Wild Side: “Candy came from out on the Island/ In the backroom she was everybody's darlin'”.

She also appeared in Jackie Curtis plays: Heaven Grand in Amber Orbit, 1969, and Vain Victory: The Vicissitudes of the Damned, 1971. She was in Tennessee William's play Small Craft Warnings after impressing Tennessee at his birthday party. 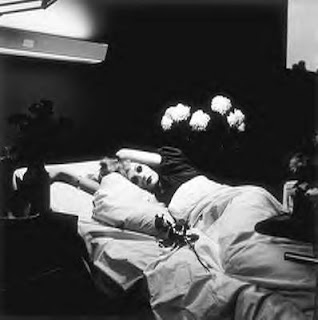 people in a mafia-run gay bar, on Christmas Eve. She (and other transy actors) campaigned without success to play the lead in Myra Breckinridge, 1970. She was also in the films: Brand X, 1970, Der Tod der Maria Malibran, 1972, Silent Night, Bloody Night, 1974.

See clips from her films here.

She died in 1974, some say as a side effect of the particular hormones that she was taking; others say of leukemia.

Transgender artist Greer Lankton made a bust of Candy in 1995.

The 1996 film I Shot Andy Warhol, although mainly about Valerie Solanas is in effect also a biography of Candy Darling, played remarkably by tough-guy actor, Stephen Dorff. It is co-written by Candy’s friend, Jeremiah Newton.

The cover of the CD I am a Bird Now, 2005, by Antony Hegarty and the Johnsons, is a photograph by Peter Hujar of Candy Darling on her deathbed.

I found your blog linked to from a web site about Candy Darling. I disliked a lot about the 60s; there was so much emphasis on looking like Hollywood's concept of feminine. I remember a male cousin coming one morning to take me to Jones Beach. I had forgotten and was still asleep. My mom woke me and I came down the stairs and my cousin said, "You wake up looking like that?" I guess he thought that my look was the result of hours of facial renovation. The only part that I did buy into was having my hair done every week. I suspect it was because I was lazy enough to deal with it to get someone else to wash my hair.

I went to a beauty salon in Baldwin, LI, NY and there was a boy who was working there while he went to beauty school. He was extraordinarily beautiful and loved to spend time in front of the mirror, applying makeup. I thought he was self-centered, but agreed with him that his image was irresistible. At the time, his hair was dark black. A few years later, I visited Greenwich Village with a friend. As I crossed the street in front of a bookstore on 6th Avenue, I heard a voice call my name. It was Jimmy. I introduced him to my friend and he corrected me, saying, "Candy." I wish I'd asked him to show me how to be queer in NYC, but I was afraid of what my friend would think. Youth makes mistakes that age regrets. I spent many evenings in the Village, not knowing ho0w to find myself. But that's past and "I am found, was blind but now I see."

I don't remember how it happened, but I ended up on a web site with a link to another about Candy, and thought, "Wow, that sounds like Jimmy." I followed it and when I read her biographical details, I realized it was the same person. It's sad that she passed away, probably unnecessarily, but it's nice to know that she left an indelible mark on the GLBT community. I'd love to (buy and) read one of her books and looked on Amazon.com and they're very expensive.

Anyway, thank you for your informative site and I wish you well. It seems that you have done very positive things with your life. We are not what we look like; we are not what we do (although sometimes we're what we want to do), we are who we are.