Ivan Southgate was raised in Ipswich. He worked as a supporting act in Music Hall in the 1950s, and was a highly proficient ventriloquist.

He transitioned to Terri Rogers with surgery on the National Health Service in the early 1960s ++at Charing Cross Hospital. 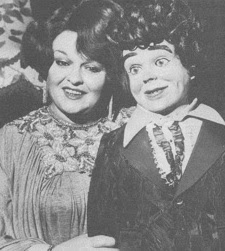 She was a highly respected designer of magical tricks for, among others, David Copperfield, Paul Daniels, and continued to perform as a ventriloquist. She was in the 1968 review, Boys Will be Girls at the Theatre Royal Stratford East, and worked the UK cabaret circuit. Her career eventually took her to Las Vegas and US television.

The one reflection that she had once been a man was that she gave her dummy, Shorty Harris, a deep male voice.

Her husband was Val Andrews.

She died after a series of strokes.