Gioacchino Stajano was born in the province of Lecce in southern Italy. His uncle was the notable fascist, Achille Starace.  At age 12, with the fall of fascism, his parents separated and he was sent to a Jesuit school. 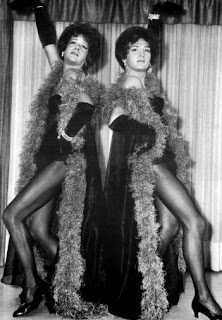 Giò completed his education at the Academy of Fine Arts in Florence, and the architectural university in Rome.

In 1956 Giò exhibited his paintings with some success, but is better known for scandal and literature. Asked by a woman if he were a man dressed as a woman or a woman dressed as a man, he answered that he was ‘frocio’ dressed as a frocio.

In 1959, he wrote and published the autobiographical Roma capovolta about the café society soon to be made famous by Federico Fellini in La dolce vita. As it was explicitly gay, it was banned as contrary to public morals. The media attention made Giò the most famous homosexual in Italy. 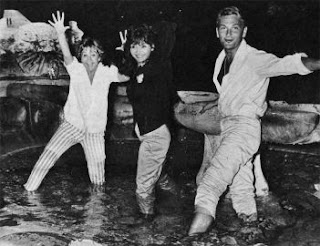 Next Giò wrote Meglio l’uovo oggi ( = a better egg today), a roman a clef about gay life in Rome, including that of the former king Umberto II.  Giò wrote Roma Erotica. These were also banned, but not until after he had sold many copies. Stejano was famous. He opened a bar. He worked with the drag star Dominot. He inspired Fellini by bathing fully dressed in a fountain, which was copied in La dolce vita, 1960, with Anita Ekberg doing the bathing. He was in La dolca vita, but he quarrelled with the producer and lost his credit.

1958-61 Giò worked for Lo Specchio, a scandal rag. In 1961, during the Ballette Verdi gay scandal, he was interrogated by magistrates, and as a protest, he appeared in court in female mourning drag.

In the late 1960s Giò wrote for Men, a fashion and gossip magazine, as a comical agony aunt, Il salotto di Oscar Wilde. This was the only gay column in Italy at the time. In 1971 he became the director of the magazine. He never identified with the gay movement, but they were interested in him. 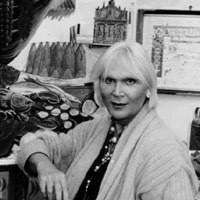 In 1983 Giò transitioned to female, and became Maria Gioacchina Stajano Starace, Contessa Briganti di Panico, although she still used 'Giò' in her public life. Her first interview was with Il Borghese for which he had written as ‘Pantera Rosa’, mainly about Roman aristocracy.

In 1992 she published her autobiography La mia vita scandalosa, thus being the first Italian to publish on being gay and the first on being transgender.

In her later years Giò returned to the village of her birth, and returned to the Church. She declared to the press that she wanted to enter a nunnery but church does not recognize her gender.

Giò was in 9 films in addition to La dolce vita: